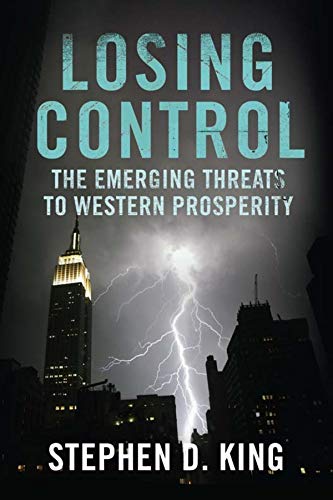 Used Price
£4.49
New RRP £25.00
Free Shipping in the UK
As the economic giants of Asia and elsewhere have awakened, Western leaders have increasingly struggled to maintain economic stability. This book suggests that the decades ahead can see a major redistribution of wealth and power across the globe that forces consumers in the United States and Europe to stop living beyond their means.
Reviews:
Trustpilot
Very Good

As the economic giants of Asia and elsewhere have awakened, Western leaders have increasingly struggled to maintain economic stability. The international financial crisis that began in 2007 is but one result of the emerging nations' increased gravitational pull. In this vividly written and compellingly argued book, Stephen D. King, the global chief economist at HSBC, one of the largest banking groups in the world, suggests that the decades ahead will see a major redistribution of wealth and power across the globe that will force consumers in the United States and Europe to stop living beyond their means.

The tide of money washing in from emerging nations has already fuelled the recent property bubble in the West, while new patterns of trade have left the West increasingly dependent on risky financial services. Unless things change drastically, King argues, the increasing power of emerging markets, when coupled with poor internal regulation and an increasingly anachronistic system of global governance, will result in greater instability and income inequality, accompanied by the risk of a major dollar decline. And as Western populations age and emerging economies develop further, the social and political consequences may be alarming to citizens who have grown accustomed to living in prosperity.

"I've not come across another book which so forcefully gives the European or American reader a China-centred view rather than a western-centric one...A disorientating and thought-provoking perspective."- Diane Coyle, The Enlightened Economist

"Mr. King lays out his arguments in accessible and engaging prose. He is a lively writer with a deft eye for catchy historical analogies." - The Economist

Stephen D. King is group chief economist and global head of economics and asset allocation research at HSBC. He lives in London.

GOR001788665
Losing Control: The Emerging Threats to Western Prosperity by Stephen D. King
Stephen D. King
Used - Very Good
Hardback
Yale University Press
2010-04-06
304
0300154321
9780300154320
N/A
Book picture is for illustrative purposes only, actual binding, cover or edition may vary.
This is a used book - there is no escaping the fact it has been read by someone else and it will show signs of wear and previous use. Overall we expect it to be in very good condition, but if you are not entirely satisfied please get in touch with us.