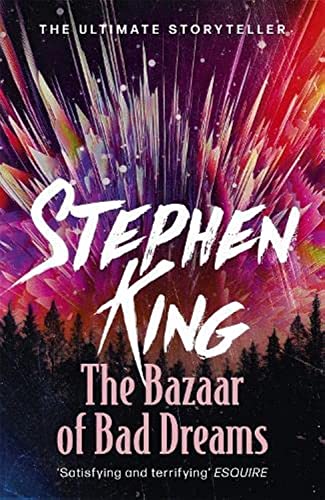 The Bazaar of Bad Dreams
by Stephen King

Used Price
£3.99
New RRP £9.99
Free Shipping in the UK
The No.1 bestselling author delivers an 'outstanding' (USA Today) collection of thrilling stories, introducing each one with a fascinating piece on when, where or how he came to write it.
Very Good Good Well Read

The Bazaar of Bad Dreams Summary

The Bazaar of Bad Dreams by Stephen King

The No.1 bestselling author delivers an 'outstanding' (USA Today) collection of thrilling stories, introducing each one with a fascinating piece on when, where or how he came to write it.

There is a treasure here for every reader: a man who keeps reliving exactly the same life, repeating his mistakes over and over again; a columnist who kills people by writing their obituaries; a poignant tale about the end of the human race and a firework competition between neighbours which reaches an explosive climax. And, exclusive to this paperback edition (and the eBook from 6 September), a brand new story 'Cookie Jar'.

'I made them especially for you,' says King. 'Feel free to examine them, but please be careful. The best of them have teeth.'

TABLE OF CONTENTS FOR THE BAZAAR OF BAD DREAMS

The Bazaar of Bad Dreams Reviews

He seduces you with an intimate author's note introducing each tale, then proceeds to chill you to the bone. Do not read before bed * Daily Mail *
The Bazaar of Bad Dreams is the title it more than lives up to, but just as interesting as the stories themselves are their prefaces, in which he reveals what inspired each one. Who besides King would conjure a flesh-eating station wagon from a drive to see his college sweetheart? * Observer *
This collection of short works... reveals King's mastery of the novella * Guardian *
A tense inventory of stories... King manages to portray a remarkable depth of character within the swiftness of a short story and manoeuvres a vast range of plots...There are treasures to be found in The Bazaar of Bad Dreams and those who love King... will find much to savour * Independent *
King is a laureate of small towns; his ear for dialogue is unerring ... He is also one of those rare authors who can write well about childhood. Most potently, King can sketch a full-blooded character in just a few pen strokes. This gift comes to the fore in his short stories, where every syllable counts * Sunday Telegraph *
A more versatile writer than you might imagine * Sunday Times *
Some of King's strongest work in recent years brought together to form an excellent collection * Sci-Fi Bulletin *
Short stories have a famous place in the King oeuvre, with the likes of The Body and Rita Hayworth and Shawshank Redemption finding second lives on the big screen as Stand By Me and Shawshank Redemption... Like all the greats, though, his ability to grip the reader's mind, body and soul with his prose makes it all look easy * USA Today *
A meaty collection with interesting insights into the creative process of a writer who caused many sleepless nights * Washington Post *
One of the best aspects of his new collection of short stories, The Bazaar of Bad Dreams, is the commentary that prefaces each one, describing the creative process through which it travelled from brain to page * GQ *

GOR007737930
The Bazaar of Bad Dreams by Stephen King
Stephen King
Used - Very Good
Paperback
Hodder & Stoughton General Division
2016-09-06
528
1473698928
9781473698925
N/A
Book picture is for illustrative purposes only, actual binding, cover or edition may vary.
This is a used book - there is no escaping the fact it has been read by someone else and it will show signs of wear and previous use. Overall we expect it to be in very good condition, but if you are not entirely satisfied please get in touch with us.