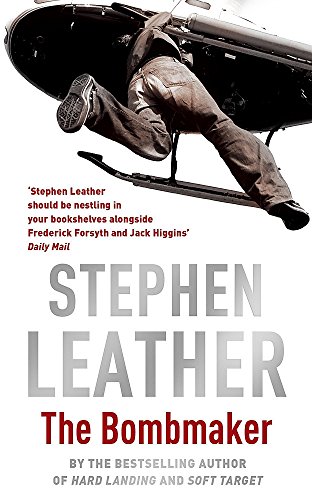 The Bombmaker
by Stephen Leather

In Stock
£4.49
A major thriller from Stephen Leather, the master of the contemporary action novel.
Very Good Good
12 in stock

The Bombmaker by Stephen Leather

Andrea Hayes was one of the IRA's most deadly killers. But when a misplaced bomb ripped apart a group of passing kids, she left all that behind her.

Now, years later, she lives a quiet, suburban life with her husband and young daughter, and her days of violence seem a distant memory. But then her daughter is kidnapped by persons unknown, and the past comes knocking at her door . . .

'A whirlwind of action, suspense and vivid excitement' - Irish Times on THE BIRTHDAY GIRL 'Exciting stuff with plenty of heart-palpitating action gingered up by mystery and intrigue ... Leather is an intelligent thriller writer' - Daily Mail on THE TUNNEL RATS 'This book should be compulsory reading' - Aberdeen Evening Express on THE SOLITARY MAN 'Stephen Leather should be nestling in your bookshelves alongside Frederick Forsyth and Jack Higgins' - Daily Mail 'This is as hi-tech and as world-class as the thriller genre gets.' - Express on Sunday on THE BOMBMAKER

GOR000475106
The Bombmaker by Stephen Leather
Stephen Leather
Used - Very Good
Paperback
Hodder & Stoughton General Division
1999-01-01
416
0340689560
9780340689561
N/A
Book picture is for illustrative purposes only, actual binding, cover or edition may vary.
This is a used book - there is no escaping the fact it has been read by someone else and it will show signs of wear and previous use. Overall we expect it to be in very good condition, but if you are not entirely satisfied please get in touch with us.