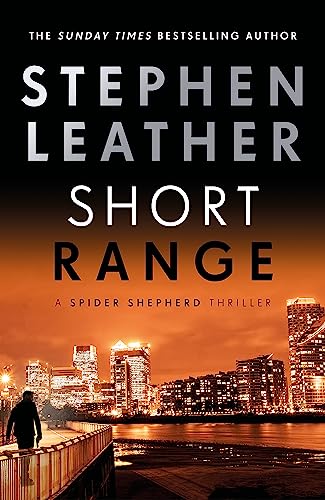 The explosive new thriller in the Spider Shepherd series

Dan 'Spider' Shepherd's career path - soldier, cop, MI5 officer - has always put a strain on his family. So he is far from happy to learn that MI5 is using teenagers as informants. Parents are being kept in the dark and Shepherd fears that the children are being exploited.

As an undercover specialist, Shepherd is tasked with protecting a 15-year-old schoolboy who is being used to gather evidence against violent drug dealers and a right-wing terrorist group.

But when the boy's life is threatened, Shepherd has no choice but to step in and take the heat.

And while Shepherd's problems mount up on the job front, he has even greater problems closer to home. His son Liam has fallen foul of the Serbian Mafia and if Shepherd doesn't intervene, Liam will die.

GOR010304361
Short Range: The 16th Spider Shepherd Thriller by Stephen Leather
Stephen Leather
The Spider Shepherd Thrillers
Used - Very Good
Paperback
Hodder & Stoughton
2020-01-23
320
1473671957
9781473671959
N/A
Book picture is for illustrative purposes only, actual binding, cover or edition may vary.
This is a used book - there is no escaping the fact it has been read by someone else and it will show signs of wear and previous use. Overall we expect it to be in very good condition, but if you are not entirely satisfied please get in touch with us.