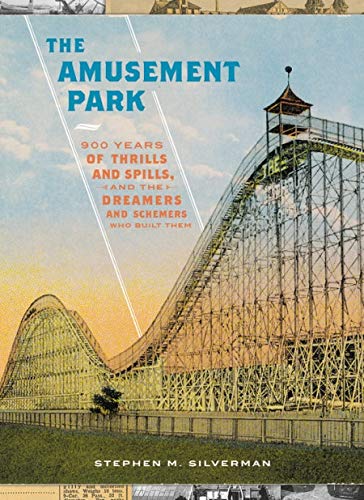 New Price
£24.99
Free Shipping in the UK
The electrifying, never-before-told history of amusement parks, from the middle ages to present day, populated by the colorful (and sometimes criminal) characters who built them, and the regular folks who sought their magical, albeit temporary, charms.
New£24.99

The Amusement Park: 900 Years of Thrills and Spills, and the Dreamers and Schemers Who Built Them by Stephen M. Silverman

Step right up! The Amusement Park is a rich, anecdotal history that begins nine centuries ago with the "pleasure gardens" of Europe and England and ends with the rise and fall and rise again of some of the most elaborate parks in the world. It's a history told largely through the stories of the colorful, sometimes hedonistic characters who built them and features, among many, showmen like Joseph and Nicholas Schenck and Marcus Loew, railroad barons such as Andrew Mellon and Henry E. Huntington, and the men who ultimately destroyed the parks including Robert Moses and Fred Trump. The many gifted artisans and craftspeople who brought these parks to life are also featured, along with an amazing cast of supporting players from Al Capone to Annie Oakley. And, of course, there are the rides, whose marvels of engineering and heart-stopping thrills are celebrated at full throttle. The parks and fairs featured include the 1893 Chicago World's Fair, Coney Island, Steeplechase Park, Dreamland, Euclid Beach Park, Cedar Point, Palisades Park, Ferrari World, Dollywood, Sea World, Six Flags Great Adventure, Universal Studios, Disney World and Disneyland, and many more.

"[The Amusement Park] is stunningly writ-ten while being both entertaining and vastly informative.... A must for any-one with interest in the business of fun."

"[The Amusement Park is] rich with anecdotes that complement its easy-to-read style; truly this book is suggested for those who have a strong interest in the subject as well as for those interested in American recreational culture of the 19th and 20th centuries... This ambitious project could possibly be considered the definitive work on the history of what is considered today the Amusement Park."--Boston City Paper
"Spectacular...lavishly illustrated, deeply researched and widely enjoyable."--Chicago Tribune
"The most fascinating part of the book is the schemers and dreamers who made [the parks] all become reality all the way back to the Venice ferris wheel, to P.T. Barnum, Walt Disney and to the latest from Universal Studios, Disney and Six Flags... It's a perfect summer book."--Provokr
"A vivid -- often ardent -- history... A legitimate way to study American cultural and social history... Even in this digital age, it seems, there's a craving for communal diversion, and for gathering agog crowds before a shared spectacle."--Wall Street Journal
"Compelling."--New York Post
"Starting with the Middle Ages, Silverman traces the path from European 'pleasure gardens' to Universal Studios, profiling the colorful characters who created amusement parks and the rides that drew customers."--Publishers Weekly, Spring Announcements feature

Stephen M. Silverman is a twenty-year veteran of Time Inc. and was the founding editor of People.com. He is the author of The Catskills: It's History and How It Changed America among many others. His work has appeared in Esquire, Harper's Bazaar, The New York Times, The Times (London), Vogue, and The Washington Post. He lives in New York City.

NGR9780316416481
The Amusement Park: 900 Years of Thrills and Spills, and the Dreamers and Schemers Who Built Them by Stephen M. Silverman
Stephen M. Silverman
New
Hardback
Black Dog & Leventhal Publishers Inc
2019-05-07
432
0316416487
9780316416481
N/A
Book picture is for illustrative purposes only, actual binding, cover or edition may vary.
This is a new book - be the first to read this copy. With untouched pages and a perfect binding, your brand new copy is ready to be opened for the first time.