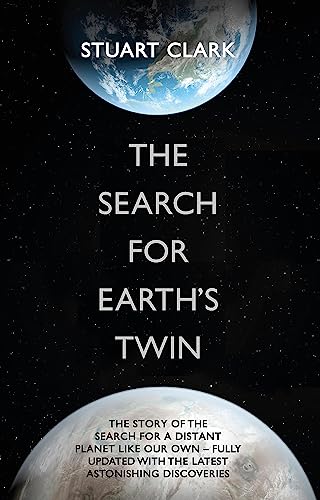 The Search For Earth's Twin by Stuart Clark

The story of man's epic quest to find an Earth-like planet capable of sustaining complex life.

The Search For Earth's Twin by Stuart Clark

In 1995 two Swiss astronomers discovered a planet circling a star other than our Sun. This changed our perception of the Universe forever, proving that Earth and the other celestial bodies in our Solar System are not alone in outer space.

Now, after a decade of exploration, more than 860 planets have been discovered, many of which are completely unlike anything else we know. Some are blacker than coal; some are bathed in molten lava; others are perpetually scoured by hurricane-force winds; some have not one sun but two that rise in the morning, and others are perpetually drowned in global oceans.

But as well as strange, inhabitable lands, there is familiarity too. Some of these alien worlds are strikingly similar to planets in our Solar System. Astronomers now know of planets just like Jupiter, Neptune, Mars and Mercury orbiting stars similar to our Sun, both nearby and deep into space.

Authoritatively written and fully up to date on this fast-moving area of science, The Search for the Earth's Twin will take you on a journey through the cosmos via frozen wastelands, slow-moving globes and fiery volcanic bodies, to planets that can - and just might - sustain complex life. The prospect of discovering the Earth's twin is now tantalisingly close.

Dr Stuart Clark is the author of the critically acclaimed book The Sun Kings: The Unexpected Tragedy of Richard Carrington and the Tale of How Modern Astronomy Began. A former editor of the United Kingdom's best-selling astronomy magazine, Astronomy Now, and a Visiting Fellow at the University of Hertfordshire, he currently writes for the European Space Agency and is a regular contributor to such magazines as New Scientist and BBC Focus. Dr Clark's previous books also include Journey to the Stars and Universe in Focus: The Story of the Hubble Telescope
GOR009901700
9781848665859
1848665857
The Search For Earth's Twin by Stuart Clark
Stuart Clark
Used - Very Good
Paperback
Quercus Publishing
2017-07-13
240
N/A
Book picture is for illustrative purposes only, actual binding, cover or edition may vary.
This is a used book - there is no escaping the fact it has been read by someone else and it will show signs of wear and previous use. Overall we expect it to be in very good condition, but if you are not entirely satisfied please get in touch with us
Trustpilot