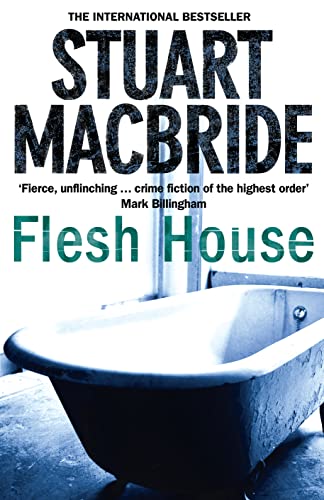 The case was closed. Until the killer walked free...

When an offshore container turns up at Aberdeen Harbour full of human meat, it kicks off the largest manhunt in the Granite City's history.

Twenty years ago `The Flesher' was butchering people all over the UK - turning victims into oven-ready joints - until Grampian's finest put him away. But eleven years later he was out on appeal. Now he's missing and people are dying again.

When members of the original investigation start to disappear, Detective Sergeant Logan McRae realizes the case might not be as clear cut as everyone thinks...

Twenty years of secrets and lies are being dragged into the light. And the only thing that's certain is Aberdeen will never be the same again.

'Stuart MacBride is the most exciting thing to happen to British crime fiction in the last ten years. Flesh House is his fourth book and the best yet ... New readers should start here' Northern Echo

GOR001213793
Flesh House (Logan McRae, Book 4) by Stuart MacBride
Stuart MacBride
Logan McRae
Used - Very Good
Paperback
HarperCollins Publishers
2008-05-06
480
0007244568
9780007244560
N/A
Book picture is for illustrative purposes only, actual binding, cover or edition may vary.
This is a used book - there is no escaping the fact it has been read by someone else and it will show signs of wear and previous use. Overall we expect it to be in very good condition, but if you are not entirely satisfied please get in touch with us.