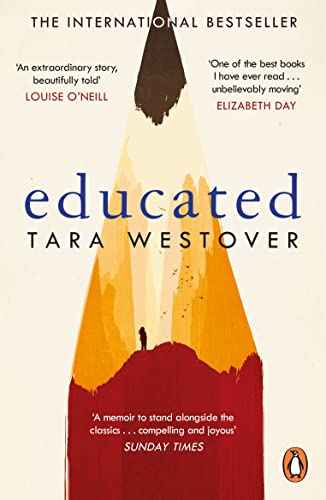 'An amazing story, and truly inspiring. The kind of book everyone will enjoy. IT'S EVEN BETTER THAN YOU'VE HEARD.' - Bill Gates

Tara Westover and her family grew up preparing for the End of Days but, according to the government, she didn't exist. She hadn't been registered for a birth certificate. She had no school records because she'd never set foot in a classroom, and no medical records because her father didn't believe in hospitals.

As she grew older, her father became more radical and her brother more violent. At sixteen, Tara knew she had to leave home. In doing so she discovered both the transformative power of education, and the price she had to pay for it.
________________________

* From one of TIME magazine's 100 most influential people of 2019
* Shortlisted for the 2018 BAMB Readers' Awards
* Recommended as a summer read by Barack Obama, Antony Beevor, India Knight, Blake Morrison and Nina Stibbe

A memoir to stand alongside classics by the likes of Jeanette Winterson and Lorna Sage . . . a compelling and ultimately joyous account of self-determination * Sunday Times *
[A] fascinating, jaw-dropping memoir -- Nina Stibbe * Observer *
[A] superb memoir... Westover's journey from a remote corner of the American west to one of the world's grandest seats of learning is extraordinary . . . Her story, of fighting to be herself, is as old as the hills she came from, but Westover gives us such a fresh, absorbing take that it deserves to bring her own private Idaho into the bestseller lists, book groups and, eventually, cinemas. * The Times *
Brilliantly recounts her journey towards knowledge and enlightenment -- Blake Morrison * Guardian *

An amazing story, and truly inspiring. The kind of book everyone will enjoy. IT'S EVEN BETTER THAN YOU'VE HEARD.

-- Bill Gates
Her story is remarkable, as each extreme anecdote described in tidy prose attests. That someone who grew up in her circumstances could achieve as much as she has is astonishing . . . The central tension she wrestles with throughout her book is how to be true to herself without alienating her family. Her upbringing was extraordinary, but that struggle is not. * The Economist *
This memoir [is] one of the wisest accounts of family love and betrayal that I've read * Mail on Sunday *
[An] astonishing autobiography -- Antony Beevor
Heartbreaking in its honesty...[an] intelligent and powerful memoir * Literary Review *
An astonishing and uplifting story about the transformative power of education * Mail on Sunday, 2018 Cultural Highlights *
Educated is quite simply one of the best books I have ever read. What a writer, what a thinker and what a gift for the rest of us to be able to read her story. Unbelievably moving and profoundly thought-provoking. -- Elizabeth Day
Educated is an unflinching account of love and brutality, of the strength of blood ties and the power of imagination, and of a young woman whose intellect, self-knowledge and courage illuminate every page. There are passages so painfully vivid that they sear themselves into the memory, yet Westover is never prurient or punitive: even when writing from the depths, she does so with compassion and grace. Both the book and its writer are remarkable in every respect -- Sarah Perry, bestselling author of THE ESSEX SERPENT
Westover has a story to tell that shouldn't be ignored * The Guardian *
This fiercely intelligent memoir is a fascinating and compassionate view of another world and the author's struggle to both escape from and understand it as she heads out into the world * The Pool, Ones to Watch in 2018 *
A shocking and powerfully moving memoir * Daily Express *
What comes through is Tara's grit, determination and instinctive sense that somewhere within education lies her redemption ... There is pain and adversity in this heart-wrenching memoir but ultimately what Tara leaves us with is hope * Sunday Express *
Marvellous. There is no feeling like discovering a young writer who is springing up fully armed with so much talent -- Stephen Fry
Absolutely superb . . . the last 100 pages were so gripping I could hardly breathe -- Sophie Hannah
Tara Westover's beautifully written memoir shines a light on a part of our country that we too often overlook. Her powerful tale-of trying to find a place for herself in the world, without losing her connection to her family or her beloved home-deserves to be widely read. My Mamaw would have been rooting for Tara. -- J.D. Vance, author of Hillbilly Elegy
Educated, in showing us the unstoppable power of a young woman determined to make her own decisions and find her own way, is an inspiring and important tale for our times. I am still cheering her on -- Rebecca Stott, award winning author of THE DAYS OF RAIN

Tara Westover was born in rural Idaho. She studied history at Brigham Young University and upon graduation was awarded a Gates Cambridge Scholarship. She received an MPhil in intellectual history from Trinity College, Cambridge in 2009, and a PhD in the same subject in 2014.

GOR009431306
Educated: The international bestselling memoir by Tara Westover
Tara Westover
Used - Very Good
Paperback
Cornerstone
2018-11-01
400
0099511029
9780099511021
N/A
Book picture is for illustrative purposes only, actual binding, cover or edition may vary.
This is a used book - there is no escaping the fact it has been read by someone else and it will show signs of wear and previous use. Overall we expect it to be in very good condition, but if you are not entirely satisfied please get in touch with us.