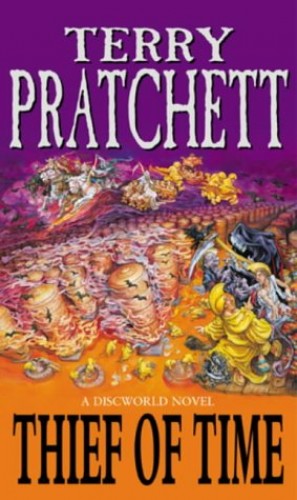 Thief Of Time
by Terry Pratchett

In Stock
£3.99
Time is a resource.And on the Discworld that is the job of the Monks of History, who store it and pump it from the places where it's wasted (like the underwater - how much time does a codfish need?) to places like cities, where there's never enough time.
Very Good Good Well Read
21 in stock

Time is a resource. Everyone knows it has to be managed. And on the Discworld that is the job of the Monks of History, who store it and pump it from the places where it's wasted (like the underwater - how much time does a codfish need?) to places like cities, where there's never enough time. But the construction of the world's first truly accurate clock starts a race against, well, time for Lu Tze and his apprentice Lobsang Ludd. Because it will stop time. And that will only be the start of everyone's problems. THIEF OF TIME comes complete with a full supporting cast of heroes, villains, yetis, martial artists and Ronnie, the fifth Horseman of the Apocalypse (who left before they became famous).

"'Terry Pratchett is one of the great inventors of secondary - or imaginative or alternative - worlds. He is not derivative. He is too strong...He has the real energy of the primary storyteller'" -- A. S. Byatt * The Times *
"'In a better world he would be acclaimed as a great writer rather than a merely successful one...This is the best Pratchett I've read...Ought to be a strong contender for The Booker Prize'" -- Charles Spencer * Sunday Telegraph *
"'Reads with all the polished fluency and sure-footed pacing that have become Pratchett's hallmarks over the years'" -- Peter Ingham * The Times On Saturday *

GOR001161503
Thief Of Time: (Discworld Novel 26) by Terry Pratchett
Terry Pratchett
Discworld Novels
Used - Very Good
Paperback
Transworld Publishers Ltd
2002-05-01
432
0552148407
9780552148405
N/A
Book picture is for illustrative purposes only, actual binding, cover or edition may vary.
This is a used book - there is no escaping the fact it has been read by someone else and it will show signs of wear and previous use. Overall we expect it to be in very good condition, but if you are not entirely satisfied please get in touch with us.