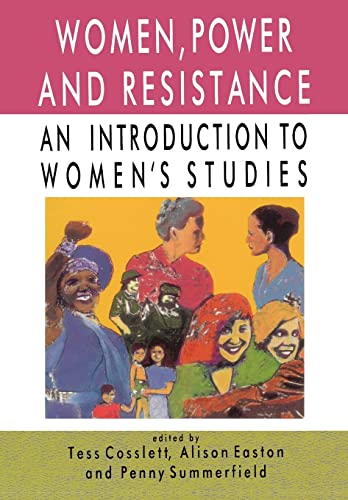 In Stock
£5.99
This book is an accessible introductory to Women's Studies. It is divided into interdisciplinary sections covering key aspects and major debates, centering on four main areas: The Social Organization of Gender Relations; The Cultural Representation of Women; Gender and Social Identity; Women and Political Change.
Very Good Good
Only 2 left

Women, Power and Resistance is an accessible introductory book on Women's Studies. It is divided into interdisciplinary sections covering key aspects and major debates, centering on four main areas:

The Social Organization of Gender Relations

The Cultural Representation of Women

Tess Cosslett is Senior Lecturer in English at Lancaster University. She lectures on fairytales on the Part One Women's Studies course, and teaches a module on women's auto/biography as part of the Women's Studies MA. She has written on female friendship in Victorian fiction, and on the representation of childbirth. Her most recent book is Women Writing Childbirth (1994). She also writes poems.

Alison Easton has taught at Lancaster since 1973 and is now Senior Lecturer in English. She specializes in nineteenth-century American literature and women's writing, and is author of The Making of the Hawthorne Subject (1996). She was Co-Director of Lancaster's Centre for Women's Studies 1991-94, and first convenor of the introductory Women's Studies course.

Penny Summerfield is Professor of Women's History at Lancaster University. She was Director and then Co-Director of the Centre for Women's Studies at Lancaster from 1989 to 1994. She teaches courses on women's history at undergraduate and postgraduate levels. She has published extensively on British women and World War Two, notably Women Workers in the Second World War (1989), and also on the history of schooling and gender identities.

Part one: The social organization of gender relations

Women, "the family" and families
Romantic love and power
Paid work in women's lives
continuity and change
The gendering of educational organizations
The church
egality or patriarchy?
Women in Buddhism revisited

Fairytales
revising the tradition
Reframing resistance
the representation of women in the visual arts
Autobiography, gender and race
Maya Angelou's 'I Know Why the Caged Bird Sings'
Women in film
Scarlett O'Hara and Orlando
"This is Your Life!"
Religious representations of women
Constructions of women and/in the Orient

GOR001193199
Women, Power and Resistance by Tess Cosslett
Tess Cosslett
Used - Very Good
Paperback
Open University Press
1996-10-01
320
0335193900
9780335193905
N/A
Book picture is for illustrative purposes only, actual binding, cover or edition may vary.
This is a used book - there is no escaping the fact it has been read by someone else and it will show signs of wear and previous use. Overall we expect it to be in very good condition, but if you are not entirely satisfied please get in touch with us.