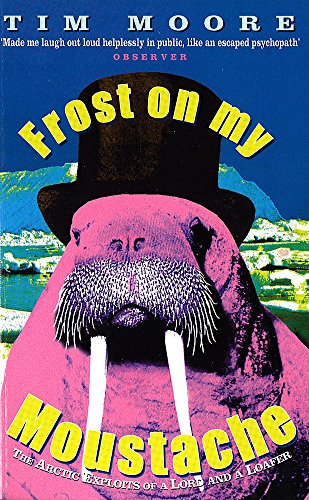 Frost On My Moustache
by Tim Moore

In Stock
£3.59
* The 'laugh out loud helplessly in public, like an escaped psychopath' (OBSERVER) travelogue and rehabilitation of a Victorian hero - Lord Dufferin
Very Good
13 in stock

Frost On My Moustache Summary

Frost On My Moustache: The Arctic Exploits of a Lord and a Loafer by Tim Moore

Inspired by the swashbuckling travelogues of Victorian diplomat Lord Dufferin, frail surburbanite Tim Moore sets out to prove his physical and spiritual worth before his sceptical Nordic in-laws by retracing Dufferin's epic voyage to Iceland and Spitzbergen.

Dufferin's battles with icebergs, polar bears and the deep potations of hospitable Norsemen is a tale of derring-do; Moore's struggle against seasickness, vertigo and over-priced groceries is all too plainly one of derring-don't. As his bid to emulate the Empire tradition of fearless pluck in the face of adversity crumbles before haughty Icelandic skippers, a convoy of Norwegian Vikings and Spitzbergen's Soviet ghost towns, he finds himself transferring his affections to Dufferin's valet Wilson, a man so profoundly gloomy that 'he was seen to smile but once, when told that his colleague, the steward, had been almost thrown overboard'. As Moore says, 'Dufferin seems the personification of Kipling's 'If'. I'm more of a 'But... ' man myself.'

FROST ON MY MOUSTACHE is the wretched apologia of a big earl's blouse.

Frost On My Moustache Reviews

There won't be a funnier or more original contender until Tim Moore publishes his next volume ... There hasn't been such a fresh voice among itinerant writers since Redmond O'Hanlon or Bill Bryson got started * SPECTATOR *
Regularly had me laughing out loud * SUNDAY TIMES *
His is a rare comic talent, and his debut a brilliantly sustained piece of travel writing * THE TIMES *
One of the funniest travelogues you will ever read * EXPRESS *
Made me laugh out loud helplessly in public, like an escaped psychopath * Observer *
A Joy -- Vic Reeves
Book of the Year * Spectator *
A hilarious journal of sustained sardonic humour * Esquire *

Failed dandy Tim Moore lives in West London with his wife and slightly too many children. His writing has appeared in several publications including the SUNDAY TIMES, the INDEPENDENT, the OBSERVER, ESQUIRE and the EVENING STANDARD.

GOR000661055
Frost On My Moustache: The Arctic Exploits of a Lord and a Loafer by Tim Moore
Tim Moore
Used - Very Good
Paperback
Little, Brown Book Group
2000-01-06
288
0349111405
9780349111407
N/A
Book picture is for illustrative purposes only, actual binding, cover or edition may vary.
This is a used book - there is no escaping the fact it has been read by someone else and it will show signs of wear and previous use. Overall we expect it to be in very good condition, but if you are not entirely satisfied please get in touch with us.