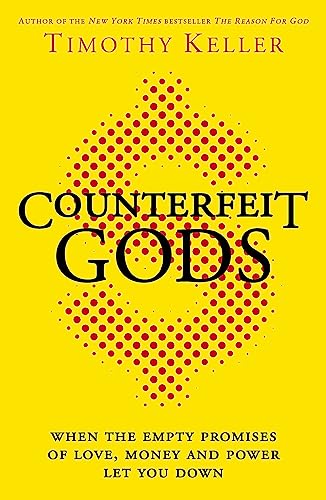 In Stock
£9.99
New book from the bestselling author of THE REASON FOR GOD
Very Good
Only 1 left

Counterfeit Gods: When the Empty Promises of Love, Money and Power Let You Down by Timothy Keller

The issue of idolatry has been with the human race for thousands of years; the subtle temptation is always to take what is good and turn it into the ultimate good, elevating it above all other things in the search for security and meaning. In this timely and challenging book, New York pastor Timothy Keller uses classic Bible stories to look at the issue of idolatry - from the worship of actual idols in the Old Testament, to the idolatry of money by the rich young ruler when he was challenged by Jesus to give up all his wealth. Keller cuts through our dependence on the glittering false idols of money, sex and power to uncover the path towards trust in the real ultimate - God. Today's idols may look different from those of the Old Testament, but Keller argues that they are no less damaging. Culturally transforming as well as biblically based, COUNTERFEIT GODS is a powerful look at the temptation to worship what can only disappoint, and is a vital message in today's current climate of financial and social difficulty.

Fifty years from now, if evangelical Christians are widely known for their love of cities, their commitment to mercy and justice, and their love of their neighbors, Tim Keller will be remembered as a pioneer of the new urban Christians. * Christianity Today magazine *
'In this apologia for Christian faith, Keller mines material from literary classics, philosophy, anthropology and a multitude of other disciplines to make an intellectually compelling case for God. Written for sceptics and the believers who love them, the book draws on the author's encounters as founding pastor of New York's booming Redeemer Presbyterian Church.' for THE REASON FOR GOD * Publishers Weekly *
Tim Keller's ministry in New York City is leading a generation of seekers and skeptics toward belief in God. I thank God for him. * Billy Graham *
'This is a great book. All pastors and thinking Christians should read this book.' * Christianity Magazine *

Timothy Keller was asked to start Redeemer Presbyterian Church in Manhattan in 1989, and under his leadership the church`s congregation experienced unprecedented growth from 50 to 5000 members. His congregation consists mainly of urban professionals, whom he believes exhibit disproportionate influence over the culture and its ideas. Timothy Keller's book THE REASON FOR GOD was named Book of the Year for 2008 by World Magazine.

GOR002819384
Counterfeit Gods: When the Empty Promises of Love, Money and Power Let You Down by Timothy Keller
Timothy Keller
Used - Very Good
Paperback
Hodder & Stoughton
2010-09-16
240
0340995084
9780340995082
N/A
Book picture is for illustrative purposes only, actual binding, cover or edition may vary.
This is a used book - there is no escaping the fact it has been read by someone else and it will show signs of wear and previous use. Overall we expect it to be in very good condition, but if you are not entirely satisfied please get in touch with us.