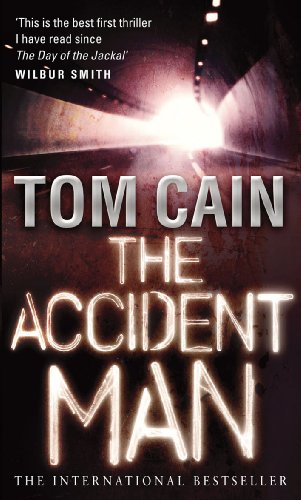 The Accident Man
by Tom Cain

The Accident Man by Tom Cain

Meet the Accident Man, Samuel Carver Carver is a good guy who makes bad things happen to bad people. Drug-baron's helicopter develops mechanical failure mid-flight: Samuel Carver. Terrorist blown-up in his own bomb factory: Samuel Carver. Ex-SAS, now freelance mercenary he is the frontline weapon of the 'Consortium', a black-ops British government outfit, or is it? Carver is called to do a hit at very short notice. Do this job for us and be paid very well. Refuse and you better run and hide. He believes the target to be a high-ranking Pakistani terrorist. The job is to organise a car crash in a Paris underpass. But Carver is being set up. When he discovers the real identity of his target, and more importantly the identity of the target's female companion, he knows one thing - his life is over. This is a secret too big to let him live, unless he can track down the real villains before they get to him. Combining the plotting of Robert Ludlum, with the pace and tension of Frederick Forsyth, Tom Cain is a major new thriller writer and The Accident Man is a classic in the making and launches Samuel Carver straight into the top rank of action heroes.

"The best first thriller I have read since The Day of the Jackal, and that was a long time ago. With one mightly bound Tom Cain has vaulted over Archer and Grisham and stands close on Freddie Forsyth's tail" -- Wilbur Smith
"Audacious, authentic, full of tension and tradecraft... maybe it's true and maybe it isn't, but either way it is a great thriller read" -- Lee Child
"The most audacious and timely thriller in years" * Daily Mirror *
"Fast-moving, cleverly constructed and very readable" * Daily Mail *
"Like the Bourne movies meets Frederick Forsyth" * Guardian *

Tom Cain is an award-winning journalist with twenty-five years' experience working for Fleet Street newspapers, as well as for major magazines in Britain and the US. During the course of his career he has conducted several hundred in-depth interviews with senior politicians, billionaire entrepreneurs, Olympic athletes, movie stars, supermodels and rock legends. He has investigated financial scandals on Wall Street, studio intrigues in Hollywood and corrupt sports stars in Britain. He has lived in Moscow, Washington DC and Havana, Cuba. Although he has edited four magazines, published over a dozen books, written film scripts and been translated into twenty languages, this is his first thriller.

GOR000424639
The Accident Man by Tom Cain
Tom Cain
Used - Very Good
Paperback
Transworld Publishers Ltd
2008-01-28
560
0552155357
9780552155359
N/A
Book picture is for illustrative purposes only, actual binding, cover or edition may vary.
This is a used book - there is no escaping the fact it has been read by someone else and it will show signs of wear and previous use. Overall we expect it to be in very good condition, but if you are not entirely satisfied please get in touch with us.