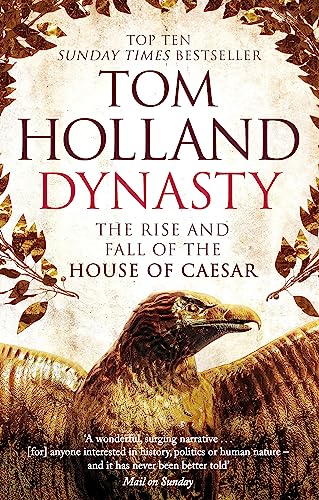 Used Price
£3.59
New RRP £12.99
Free Shipping in the UK
A masterful history of Rome's first imperial dynasty by the award-winning author of Rubicon, Persian Fire and In the Shadow of the Sword.
Very Good Good Well Read

Dynasty: The Rise and Fall of the House of Caesar by Tom Holland

'This is a wonderful, surging narrative - a brilliant and meticulous synthesis of the ancient sources . . . This is a story that should be read by anyone interested in history, politics or human nature - and it has never been better told' - Boris Johnson, Mail on Sunday

Rome was first ruled by kings, then became a republic. But in the end, after conquering the world, the Republic collapsed. Rome was drowned in blood. So terrible were the civil wars that the Roman people finally came to welcome the rule of an autocrat who could give them peace. 'Augustus,' their new master called himself: 'The Divinely Favoured One'.

The lurid glamour of the dynasty founded by Augustus has never faded. No other family can compare for sheer unsettling fascination with its gallery of leading characters. Tiberius, the great general who ended up a bitter recluse, notorious for his perversions; Caligula, the master of cruelty and humiliation who rode his chariot across the sea; Agrippina, the mother of Nero, manoeuvering to bring to power the son who would end up having her murdered; Nero himself, racing in the Olympics, marrying a eunuch, and building a pleasure palace over the fire-gutted centre of his capital.

Now, in the sequel to Rubicon, Tom Holland gives a dazzling portrait of Rome's first imperial dynasty. Dynasty traces the full astonishing story of its rule of the world: both the brilliance of its allure, and the blood-steeped shadows cast by its crimes. Ranging from the great capital rebuilt in marble by Augustus to the dank and barbarian-haunted forests of Germany, it is populated by a spectacular cast: murderers and metrosexuals, adulterers and druids, scheming grandmothers and reluctant gladiators.

Dynasty is the portrait of a family that transformed and stupefied Rome.

Holland's masterly account of this first wicked century of the Roman empire is, at its heart, a political analysis . . . the story he tells strides onwards across the landscape of grief and horror without pause or stutter . . . Holland is unshockable as he proceeds with breezy, clear-eyed analysis from one degrading display of cruelty and paranoia to the next . . . It is down to his skill as a storyteller that there's no difficulty in imagining that it might all happen again tomorrow -- Adam Nicholson * Sunday Times *
Deft and skilful . . . Among the many virtues of Tom Holland's terrific history is that he does not shrink from seeing the Roman emperors for what they were: 'the west's primal examples of tyranny' . . . Dynasty is both a formidable effort to compile what we can know about the ancient world and a sensational story -- Nick Cohen * Observer *
This is a wonderful, surging narrative - a brilliant and meticulous synthesis of the ancient sources . . . This is a story that should be read by anyone interested in history, politics or human nature - and it has never been better told -- Boris Johnson * Mail on Sunday *
This is history in which fact and fiction overlap, rigorously researched and lightened with dashes of humour . . . first-rate ancient history and a compulsively good read -- Matthew Dennison * Daily Mail *
A swaggering history of the dynastic house that Julius Caesar built. Nothing entertains like excess and the weird cruelties, bloody intrigues and eye-popping depravities of emperors Augustus, Tiberius, Caligula, Claudius and Nero are queasily fascinating * Sunday Express *
A witty and skilful storyteller . . . He recounts with pleasure his racy tales of psychopathic cruelty, incest, paedophilia, matricide, fratricide, assassination and depravity -- William Dalrymple * New Statesman *
Brilliant, terrifying and compelling -- Alex Preston * Observer *
A thrilling book by one of the country's best popular historians . . . genuinely breathtaking * History Today *

Tom Holland is an award-winning historian, author and broadcaster. He is the author of Rubicon: The Triumph and the Tragedy of the Roman Republic, which won the Hessell-Tiltman Prize for History and was shortlisted for the Samuel Johnson Prize; Persian Fire, his history of the Graeco-Persian wars, won the Anglo-Hellenic League's Runciman Award in 2006; Millennium: The End of the World and the Forging of Christendom, a panoramic account of the two centuries on either side of the apocalyptic year 1000; In the Shadow of the Sword, which covers the collapse of Roman and Persian power in the Near East, and the emergence of Islam; and Dynasty, a portrait of Rome's first imperial dynasty. He has adapted Homer, Herodotus, Thucydides and Virgil for the BBC. His translation of Herodotus was published in 2013 by Penguin Classics and followed in 2016 by a history of AEthelstan published under the Penguin Monarchs series, and in 2019 AEthelflaed England's Forgotten Founder as a Ladybird Expert Book. In 2007, he was the winner of the Classical Association prize, awarded to 'the individual who has done most to promote the study of the language, literature and civilisation of Ancient Greece and Rome'. Holland is the presenter of BBC Radio 4's Making History. He has written and presented a number of TV documentaries for the BBC and Channel 4, on subjects ranging from religion to dinosaurs. He served two years as the Chair of the Society of Authors; as Chair of the PLR Advisory Committee and was on the committee of the Classical Association. @holland_tom

GOR007527273
Dynasty: The Rise and Fall of the House of Caesar by Tom Holland
Tom Holland
Used - Very Good
Paperback
Little, Brown Book Group
2016-06-02
544
0349123837
9780349123837
Long-listed for PEN Hessell-Tiltman Prize 2016 (UK)
Book picture is for illustrative purposes only, actual binding, cover or edition may vary.
This is a used book - there is no escaping the fact it has been read by someone else and it will show signs of wear and previous use. Overall we expect it to be in very good condition, but if you are not entirely satisfied please get in touch with us.