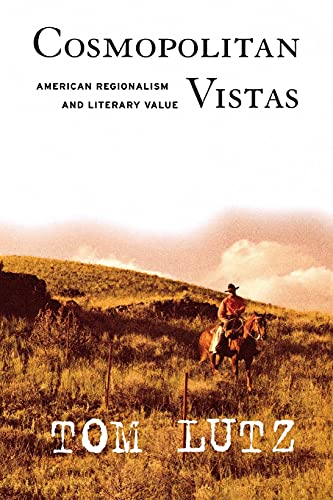 In a major statement on the relation of art and politics in America, Tom Lutz identifies a consistent ethos at the heart of American literary culture for the past 150 years. Through readings of Sherwood Anderson, Willa Cather, Hamlin Garland, Ellen...

In a major statement on the relation of art and politics in America, Tom Lutz identifies a consistent ethos at the heart of American literary culture for the past 150 years. Through readings of Sherwood Anderson, Willa Cather, Hamlin Garland, Ellen Glasgow, Sarah Orne Jewett, Sinclair Lewis, Edgar Lee Masters, Claude McKay, Edith Wharton, Anzia Yezierska, and others, Lutz identifies what he calls literary cosmopolitanism: an ethos of representational inclusiveness, of the widest possible affiliation, and at the same time one of aesthetic discrimination, and therefore exclusivity.

At the same time that it embraces the entire world, in Lutz's view, literary cosmopolitanism necessitates an evaluative stance, and it is this doubleness, this combination of egalitarianism and elitism, that animates American literature since the Civil War. The nineteenth century's realists and sentimentalists, the writers of the Harlem Renaissance and of the Southern Renaissance, the firebrands who brought in the new canon and the traditionalists who struggled to save the old all ascribe, Lutz argues, to the same cosmopolitan values, however much they disagree on what these values demand of those who hold them.

"Lutz's achievement lies in puncturing the persistent cosmopolitan and liberal condescension to the regional and to show that the 'cosmopolitan,' properly conceived cannot achieve political and aesthetic aims if one disavows its reciprocal dependence on the regional and the local. The essays in the section titled 'Toward a Theory' may well become required reading in graduate classes on American literature. Essential."-Choice, April 2005
"In his provocatively revisionist account of regional and local color fiction, Tom Lutz argues that the recent turn to cosmopolitanism in assessments of American literature is actually a return to the mainstream of American literary thought. In Lutz's view, cosmopolitanism is not new, but rather has been pursued as a value by novelists and critics from the 19th century forward. Characterized by inclusiveness, multiplicity of perspectives, and a deft shuttling between local and universal commitments, cosmopolitanism has always guided our thinking about American literature."-Kenneth Warren, University of Chicago
"Cosmopolitan Vistas sets up a far-reaching and productive conversation between U. S. regional fiction and contemporary debates in cultural studies. As a reader of regionalist texts, Lutz is consistently astute; and as a proponent of cosmopolitanism as a framework for assigning literary value, Lutz is well worth reading. He comes to regionalist fiction and its critical debates with a remarkable freshness and clarity."-Nancy Glazener, author of Reading for Realism: The History of a U. S. Literary Institution, 1850-1910
"Cosmopolitan Vistas is an ambitious and exciting work of literary criticism. In it Tom Lutz seeks to return literary critics to the literary by reminding us of our own desire for the cosmopolitan vista. His argument is striking and is amply supported by a thorough analysis of almost 150 years of critical responses to regionalism. There are very few books that take seriously criticism that was written more than twenty years ago, and his approach to this earlier material is smart and refreshing. This is a powerful and engaging book."-Catherine Jurca, author of White Diaspora: The Suburb and the Twentieth-Century American Novel

Tom Lutz is Director of the MFA Program in Critical and Creative Writing and Visiting Professor at the School of Critical Studies at the California Institute of the Arts and Professor at the University of Iowa. His books include American Nervousness, 1903: An Anecdotal History (also from Cornell), Doing Nothing: A History of Loafers, Loungers, Slackers, and Bums, and Crying: The Natural and Cultural History of Tears.

GOR009942400
Cosmopolitan Vistas: American Regionalism and Literary Value by Tom Lutz
Tom Lutz
Used - Very Good
Paperback
Cornell University Press
2004-05-13
240
0801489237
9780801489235
N/A
Book picture is for illustrative purposes only, actual binding, cover or edition may vary.
This is a used book - there is no escaping the fact it has been read by someone else and it will show signs of wear and previous use. Overall we expect it to be in very good condition, but if you are not entirely satisfied please get in touch with us.