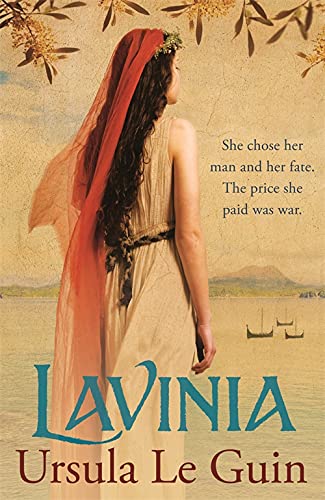 'Subtly moving, playful...a novel that brought me to tears more than once. Lavinia is a delightful heroine' GUARDIAN

'Like Spartan Helen, I caused a war. She caused hers by letting men who wanted her take her. I caused mine because I wouldn't be given, wouldn't be taken, but chose my man and my fate. The man was famous, the fate obscure; not a bad balance.'

Lavinia is the daughter of the King of Latium, a victorious warrior who loves peace; she is her father's closest companion. Now of an age to wed, Lavinia's mother favours her own kinsman, King Turnus of Rutulia, handsome, heroic, everything a young girl should want. Instead, Lavinia dreams of mighty Aeneas, a man she has heard of only from a ghost of a poet, who comes to her in the gods' holy place and tells her of her future, and Aeneas' past...

If she refuses to wed Turnus, Lavinia knows she will start a war - but her fate was set the moment the poet appeared to her in a dream and told her of the adventurer who fled fallen Troy, holding his son's hand and carrying his father on his back...

Ursula K. Le Guin is one of the finest writers of our time. Her books have attracted millions of devoted readers and won many awards, including the National Book Award, the Hugo and Nebula Awards and a Newbery Honor. Among her novels, The Left Hand of Darkness, The Dispossessed and the six books of Earthsea have attained undisputed classic status; and her recent series, the Annals of the Western Shore, has won her the PEN Center USA Children's literature award and the Nebula Award for best novel. In 2014 Ursula Le Guin was awarded the National Book Foundation Medal for Distinguished Contribution to American Letters. She lived in Portland, Oregon, until she passed away in January 2018.

GOR010796159
Lavinia by Ursula K. Le Guin
Ursula K. Le Guin
Used - Like New
Paperback
Orion Publishing Co
2010-05-13
320
0753827840
9780753827840
Short-listed for British Science Fiction Association Award 2010
Book picture is for illustrative purposes only, actual binding, cover or edition may vary.
The book has been read, but looks new. The book cover has no visible wear, and the dust jacket is included if applicable. No missing or damaged pages, no tears, possible very minimal creasing, no underlining or highlighting of text, and no writing in the margins.