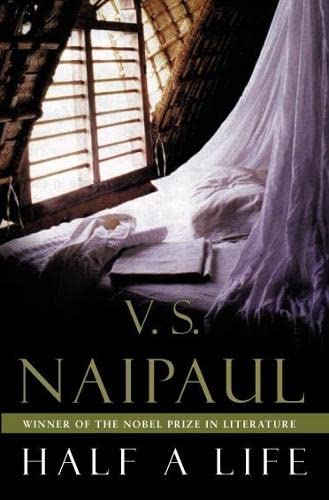 Half a Life
by V. S. Naipaul

In Stock
£3.99
A devastatingly moving and often very funny novel from a masterful voice.
Good
Only 1 left

Half a Life Summary

Half a Life by V. S. Naipaul

In Half a Life we are introduced to the compelling figure of Willie Chandran. Springing from the unhappy union of a low-caste mother and a father constantly at odds with life, Willie is naively eager to find something that will place him both in and apart from the world. Drawn to England, and to the immigrant and bohemian communities of post-war London, it is only in his first experience of love that he finally senses the possibility of fulfilment.

In its humorous and sensitive vision of the half-lives quietly lived out at the centre of our world, V.S. Naipaul's graceful novel brings its own unique illumination to essential aspects of our shared history.

`The best novel I have read this year . . . the prose is crystalline and seductively so - you hardly realize that you are consuming a work of genius until you are plunged deep into a dramatic story which stretches across three continents' Antonia Fraser, Irish Times

`A small masterpiece and a potent distillation of the author's work to date. Mr Naipaul endows his story with the heightened power of fable' Michiko Kakatuni, New York Times

`A brilliant, withering story of the bitter consequences of empire . . . Writing with a degree of wit and subtlety beyond the grasp of most writers, Naipaul has built a bleak world of discomfort and yearning from which, paradoxically, the reader will not want to escape' Jeremy Poolman, Daily Mail

`Parts are as sly and funny as anything Naipaul has written. Nobody who enjoys seeing English beautifully controlled should miss this novel' John Carey, Sunday Times

Half a Life Reviews

Eager to place himself both in and yet apart from the world, Willie Chandran is drawn to England and the immigrant community of post-war London but it is his first experience of love that may bring him the fulfilment he so desperately seeks. His wife Ana leads him to her homeland in Portuguese Africa whose inhabitants are living out the final days of colonialism. A moving and often very funny novel by the multi-award winning author who last year received the Nobel Prize for Literature.