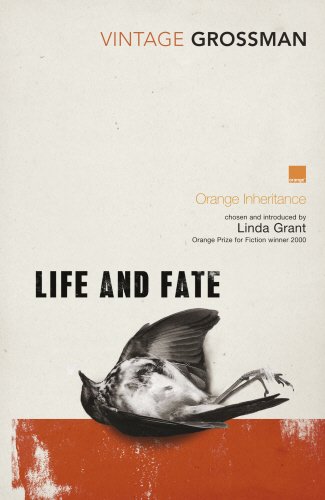 Life And Fate
by Vasily Grossman

Used Price
£9.19
Free Shipping in the UK
THIS ORANGE INHERITANCE EDITION OF Life and Fate IS PUBLISHED IN ASSOCIATION WITH THE ORANGE PRIZE FOR FICTIONBooks shape our lives and transform the way we see ourselves and each other. Vintage Classics asked the winners of The Orange Prize for Fiction which books they would pass onto the next generation and why.
Reviews:
Trustpilot
Very Good Well Read

Life And Fate by Vasily Grossman

THIS ORANGE INHERITANCE EDITION OF Life and Fate IS PUBLISHED IN ASSOCIATION WITH THE ORANGE PRIZE FOR FICTION Books shape our lives and transform the way we see ourselves and each other. The best books are timeless and continue to be relevant generation after generation. Vintage Classics asked the winners of The Orange Prize for Fiction which books they would pass onto the next generation and why. Linda Grant chose Life and Fate. This is an epic tale of a country told through the fate of a single family, the Shaposhnikovs. As the battle of Stalingrad looms Grossman's characters must work out their destinies in a world torn apart by ideological tyranny and war. 'I have urged all my friends to read it... I want others to feel as I have done - that they are entering the heart of the twentieth century, touching its pulse' Linda Grant

"One of the greatest masterpieces of the twentieth century" * Times Literary Supplement *
"It is only a matter of time before Grossman is acknowledged as one of the great writers of the 20th century... Life and Fate is a book that demands to be talked about" * Guardian *
"Vasily Grossman's novel is burnt in my memory, not only by its huge canvas, its meditation on tyranny, and its dazzling description of war, but also because this is the novel that made me cry - not just a few leaked tears, but a full-scale sobbing episode - in Montpellier airport... Grossman lost his mother in a concentration camp. In Life and Fate, he writes with tenderness, and pain, not only of that experience but of what it is like to survive tyranny. A classic indeed" -- Gillian Slovo * Independent *
"A literary genius. His Life And Fate is rated by many as the finest Russian novel of the 20th century" * Mail on Sunday *
"One of the world's great war novels" * Independent on Sunday *

Vasily Grossman was born in 1905. In 1941 he became a correspondent for the Red Army newspaper, Red Star, reporting on the defence of Stalingrad, the fall of Berlin and the consequences of the Holocaust, work collected in A Writer at War. In 1960 Grossman completed his masterpiece Life and Fate and submitted it to an official literary journal. The KGB confiscated the noveland Grossman was told that there was no chance of it being published for another 200 years. Eventually, however, with the help of Andrey Sakharov, a copy of the manuscript was microfilmed and smuggled out to the west by a leading dissident writer, Vladimir Voinovich. Grossman began Everything Flows in 1955 and was still working on it during his last days in hospital in September 1964. Linda Grant was born in Liverpool on 15 February 1951, the child of Russian and Polish Jewish immigrants. She is the author of Sexing the Millennium: A Political History of the Sexual Revolution, The Cast Iron Shore, Remind Me Who I am Again, Still Here, The People On The Street: A Writer's View of Israel, The Clothes On Their Backs,The Thoughtful Dresser and We Had It So Good. Her second novel, When I Lived in Modern Times, set in Tel Aviv in the last years of the British Mandate won the Orange Prize for Fiction in 2000.

GOR003962515
Life And Fate by Vasily Grossman
Vasily Grossman
Used - Very Good
Paperback
Vintage Publishing
2011-04-07
912
0099560631
9780099560630
N/A
Book picture is for illustrative purposes only, actual binding, cover or edition may vary.
This is a used book - there is no escaping the fact it has been read by someone else and it will show signs of wear and previous use. Overall we expect it to be in very good condition, but if you are not entirely satisfied please get in touch with us.