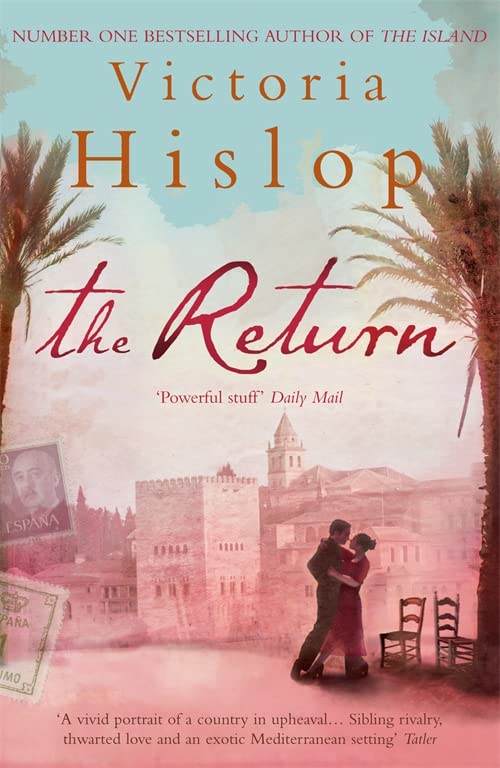 The Return
by Victoria Hislop

An atmospheric, vibrant and moving tale of pain and passion at the heart of war-torn Spain, from the million-copy bestselling author of The Island

The Return by Victoria Hislop

An atmospheric, vibrant and moving tale of pain and passion at the heart of war-torn Spain, from Victoria Hislop, the million-copy bestselling author of THE ISLAND.

Beneath the majestic towers of the Alhambra, Granada's cobbled streets resonate with music and secrets. Sonia Cameron knows nothing of the city's shocking past; she is here to dance. But in a quiet cafe, a chance conversation and an intriguing collection of old photographs draw her into the extraordinary tale of Spain's devastating civil war.

Seventy years earlier, the cafe is home to the close-knit Ramirez family. In 1936, an army coup led by Franco shatters the country's fragile peace, and in the heart of Granada the family witnesses the worst atrocities of conflict. Divided by politics and tragedy, everyone must take a side, fighting a personal battle as Spain rips itself apart.

'A well-researched and meaty follow-up to The Island' * The Times *
'THE RETURN may be a beach book, but it goes inland and rummages around in the cellars' * The Times *
'Aims to open the eyes, and tug the heartstrings, of readers... Hislop deserves a medal for opening a breach into the holiday beach bag' * Independent *
'Like a literary Nigella, she whips up a cracking historical romance with a dash of family secrets and a splash of female self-discovery' * Time Out *
'Meticulously researched historical narrative and imaginative storytelling' * Telegraph *
'Powerful stuff' * Daily Mail *
'Excellent' * Sunday Telegraph *

Inspired by a visit to Spinalonga, the abandoned Greek leprosy colony, Victoria Hislop wrote The Island in 2005. It became an international bestseller and a 26-part Greek TV series. She was named Newcomer of the Year at the British Book Awards and is now an ambassador for Lepra. Her affection for the Mediterranean then took her to Spain, and in the number one bestseller The Return she wrote about the painful secrets of its civil war. In The Thread, Victoria returned to Greece to tell the turbulent tale of Thessaloniki and its people across the twentieth century. Shortlisted for a British Book Award, it confirmed her reputation as an inspirational storyteller. Her fourth novel, The Sunrise, about the Turkish invasion of Cyprus and the enduring ghost town of Famagusta, was a Sunday Times number one bestseller. Cartes Postales from Greece, fiction illustrated with photographs, was a Sunday Times bestseller in hardback and one of the biggest selling books of 2016. Victoria's most recent novel, the poignant and powerful Those Who Are Loved, was a Sunday Times number one hardback bestseller in 2019 and explores a tempestuous period of modern Greek history through the eyes of a complex and compelling heroine. Her books have been translated into more than thirty-five languages. Victoria divides her time between England and Greece.

GOR000955020
The Return by Victoria Hislop
Victoria Hislop
Used - Very Good
Paperback
Headline Publishing Group
2009-04-16
592
0755332954
9780755332953
N/A
Book picture is for illustrative purposes only, actual binding, cover or edition may vary.
This is a used book - there is no escaping the fact it has been read by someone else and it will show signs of wear and previous use. Overall we expect it to be in very good condition, but if you are not entirely satisfied please get in touch with us.