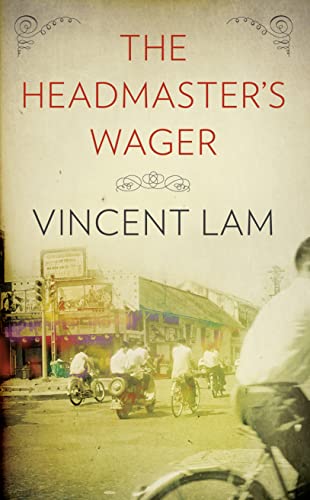 The Headmaster's Wager
by Vincent Lam

From internationally acclaimed and bestselling author Vincent Lam comes a superbly crafted, highly suspenseful, and deeply affecting novel set against the turmoil of the Vietnam War.

The Headmaster's Wager by Vincent Lam

From internationally acclaimed and bestselling author Vincent Lam comes a superbly crafted, highly suspenseful, and deeply affecting novel set against the turmoil of the Vietnam War.

Percival Chen is the headmaster of the most respected English school in Saigon. He is also a bon vivant, a compulsive gambler and an incorrigible womanizer. He is well accustomed to bribing a forever-changing list of government officials in order to maintain the elite status of the Chen Academy. He is fiercely proud of his Chinese heritage, and quick to spot the business opportunities rife in a divided country. He devotedly ignores all news of the fighting that swirls around him, choosing instead to read the faces of his opponents at high-stakes mahjong tables.

But when his only son gets in trouble with the Vietnamese authorities, Percival faces the limits of his connections and wealth and is forced to send him away. In the loneliness that follows, Percival finds solace in Jacqueline, a beautiful woman of mixed French and Vietnamese heritage, and Laing Jai, a son born to them on the eve of the Tet offensive. Percival's new-found happiness is precarious, and as the complexities of war encroach further and further into his world, he must confront the tragedy of all he has refused to see.

Blessed with intriguingly flawed characters moving through a richly drawn historical and physical landscape, The Headmaster's Wager is a riveting story of love, betrayal and sacrifice.

Praise for `Bloodletting and Miraculous Cures':

'Direct in style, unsparing though compassionate in observation, subtle in emotion, and occasionally gruesome in humour, "Bloodletting & Miraculous Cures" follows four medical students from widely different backgrounds as their stories intertwine, as their illusions shatter, and as the meanings of many lives expand around them. The good news is that doctors are human beings. The bad news is that doctors are human beings. The other good news is that this book marks a stunning debut.' Margaret Atwood, upon introducing Lam at the Giller Prize presentation

'Reading about medical problems and what goes on in the emergency ward is just absolutely enthralling to all of us, but in this case it's much more than that - it's the characters and the movement and the ease of the storytelling that I just found so irresistible.' Alice Munro

`A masterly debut...incisive, clear prose as faultless as a carefully stitched suture.' Guardian

`Scalpel sharp, as cool and polished as the steel of the mortuary table.' Financial Times

`There's no reason why "Bloodletting" shouldn't become as big a hit in this country as it has been in Canada. Simply sit back, relax and enjoy the effortless charm of Lam's storytelling.' Scotsman

Dr Vincent Lam was born in London, Ontario. His family is from the expatriate Chinese community of Vietnam. He studied medicine in Toronto and is an emergency physician. He lives in Toronto with his wife and children. www.vincentlam.ca

GOR004408655
The Headmaster's Wager by Vincent Lam
Vincent Lam
Used - Very Good
Paperback
HarperCollins Publishers
2010-04-29
432
0007340354
9780007340354
N/A
Book picture is for illustrative purposes only, actual binding, cover or edition may vary.
This is a used book - there is no escaping the fact it has been read by someone else and it will show signs of wear and previous use. Overall we expect it to be in very good condition, but if you are not entirely satisfied please get in touch with us.