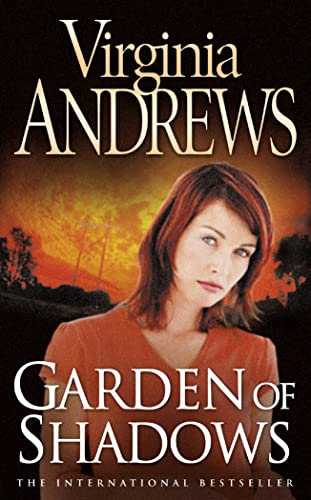 Garden of Shadows
by Virginia Andrews

The prequel to the compelling saga that began with `Flowers in the Attic', repackaged for a new generation of fans.

Garden of Shadows by Virginia Andrews

The prequel to the compelling saga that began with `Flowers in the Attic', repackaged for a new generation of fans.

THEIR DARKEST SECRETS WOULD TURN TO SHAME AND HAUNT THEIR CHILDREN'S CHILDREN.

Olivia Winfield's hopes blossomed when the dashing Malcolm Foxworth asked her to marry him. But her hopes withered like flowers in the scorching sun when his true nature was revealed. Foxworth Hall, the beautiful home that should have given them so much happiness, became like a prison to her, with Malcolm the cruellest of jailers.

Suddenly, unexpectedly, the hand of friendship was offered to Olivia when Alicia, her father-in-law's new young bride, came to Foxworth Hall. The two women were unlikely companions, but soon the laughter of their youth filled the gloomy place. Yet over them both loomed the shadow of Malcolm, whose dark desires were to sow the seeds of a shocking secret that would lead in time to a darkened, locked attic room...

`Beautifully written, macabre and thoroughly nasty... it is evocative of the nasty fairy tales like Little Red Riding Hood and The Babes in the Wood, with a bit of Victorian Gothic thrown in. ... What does shine through is her ability to see the world through a child's eyes' Daily Express

`A gruesome saga... the storyline is compelling, many millions have no wish to put this down' Ms London

Virginia Andrews lived in Norfolk, Virginia, studied art and worked as a fashion illustrator, commercial artist and portrait painter. Flowers in the Attic, based on a true story, was her first novel. It became an immediate bestseller on both sides of the Atlantic when it was first published in 1979. Virginia Andrews died in 1986, leaving a considerable amount of unpublished work.

GOR000413695
Garden of Shadows by Virginia Andrews
Virginia Andrews
Used - Very Good
Paperback
HarperCollins Publishers
1988-03-09
384
000617549X
9780006175490
N/A
Book picture is for illustrative purposes only, actual binding, cover or edition may vary.
This is a used book - there is no escaping the fact it has been read by someone else and it will show signs of wear and previous use. Overall we expect it to be in very good condition, but if you are not entirely satisfied please get in touch with us.