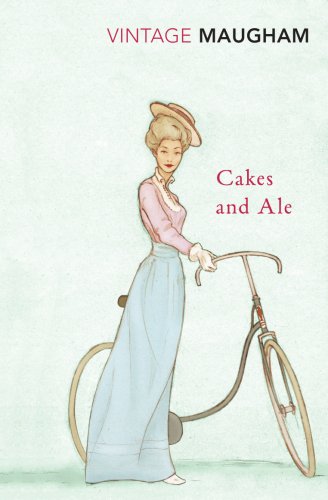 In Stock
£5.99
WITH AN INTRODUCTION BY NICHOLAS SHAKESPEARECakes and Ale is both a wickedly satirical novel about contemporary literary poseurs and a skilfully crafted study of freedom.
Good Well Read
6 in stock

WITH AN INTRODUCTION BY NICHOLAS SHAKESPEARE Cakes and Ale is both a wickedly satirical novel about contemporary literary poseurs and a skilfully crafted study of freedom. As he traces the fortunes of Edward Driffield and his extraordinary wife Rosie, one of the most delightful heroines of twentieth-century literature, Maugham's sardonic wit and lyrical warmth expertly combine in this accomplished and unforgettable novel.

"One of my favourite writers" * Gabriel Garcia Marquez *
"Cakes and Ale is a delightfully tart, meandering meditation on what it means to be an author, and its comments on the fickleness of literary celebrity are prescient and amusing. Maugham sees clearly that books are famous because of who tells you to like them, and that authors are 'good' because they are said to be." * Time Out *
"A formidable talent, a formidable sum of talents...precision, tact, irony and total absence of pomposity" * Spectator *
"[A] witty Thirties novel... Great fun" -- Val Hennessy * Daily Mail *

William Somerset Maugham was born in 1874 and lived in Paris until he was ten. He was educated at King's School, Canterbury, and at Heidelberg University. He spent some time at St. Thomas' Hospital with the idea of practising medicine, but the success of his first novel, Liza of Lambeth, published in 1897, won him over to literature. Of Human Bondage, the first of his masterpieces, came out in 1915, and with the publication in 1919 of The Moon and Sixpence his reputation as a novelist was established. At the same time his fame as a successful playwright and writer was being consolidated with acclaimed productions of various plays and the publication of several short story collections. His other works include travel books, essays, criticism and the autobiographical The Summing Up and A Writer's Notebook. In 1927 Somerset Maugham settled in the South of France and lived there until his death in 1965

GOR001945562
Cakes And Ale by W. Somerset Maugham
W. Somerset Maugham
Used - Good
Paperback
Vintage Publishing
2000-03-02
224
0099282771
9780099282778
N/A
Book picture is for illustrative purposes only, actual binding, cover or edition may vary.
This is a used book - there is no escaping the fact it has been read by someone else and it will show signs of wear and previous use. Overall we expect it to be in very good condition, but if you are not entirely satisfied please get in touch with us.