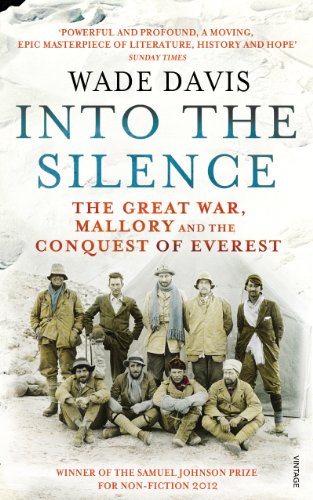 Into The Silence
by Wade Davis

In Stock
£4.49
WINNER OF THE 2012 SAMUEL JOHNSON PRIZEA monumental work of history, biography and adventure - the First World War, Mallory and Mount Everest`The price of life is death' For Mallory, as for all of his generation, death was but `a frail barrier that men crossed, smiling and gallant, every day'.
Very Good Good
12 in stock

Into The Silence Summary

Into The Silence: The Great War, Mallory and the Conquest of Everest by Wade Davis

WINNER OF THE 2012 SAMUEL JOHNSON PRIZE A monumental work of history, biography and adventure - the First World War, Mallory and Mount Everest `The price of life is death' For Mallory, as for all of his generation, death was but `a frail barrier that men crossed, smiling and gallant, every day'. As climbers they accepted a degree of risk unimaginable before the war. What mattered now was how one lived, and the moments of being alive. While the quest for Mount Everest may have begun as a grand imperial gesture, it ended as a mission of revival for a country and a lost generation bled white by war. In a monumental work of history and adventure, Davis asks not whether George Mallory was the first to reach the summit of Everest, but rather why he kept climbing on that fateful day.

Into The Silence Reviews

"Maybe the prime minister should read it" -- Stephen Frears * Guardian *
"I was enthralled by Wade Davis's Into the Silence, an account of three failed Everest expeditions leading up to the death of Mallory in 1924, which brilliantly places those feats of endurance in the context of British imperialism and the psychological aftermath of the First World War" -- Ben Macintyre * The Times *
"I was captivated. Wade Davis has penned an exceptional book on an extraordinary generation. From the pathos of the trenches to the inevitable tragedies high on Everest this is a book deserving of awards" -- Joe Simpson, author of Touching the Void
"Powerful and profound, a moving, epic masterpiece of literature, history and hope" * Sunday Times *
"Brilliantly engrossing...a superb book... At once a group biography of remarkable characters snatched from oblivion, an instant classic of mountaineering literature, a study in imperial decline and an epic of exploration" -- Nigel Jones * Guardian *

An Explorer-in-Residence at the National Geographic Society, Wade Davis holds degrees in anthropology and biology and received his Ph.D. in ethnobotany, all from Harvard University. Davis is the author of 15 books including The Serpent and the Rainbow, One River, and The Wayfinders. His many film credits include Light at the Edge of the World, an eight-hour documentary series produced for the National Geographic Channel. In 2009 he received the Gold Medal from the Royal Canadian Geographical Society for his contributions to anthropology and conservation, and he is the 2011 recipient of the Explorers Medal, the highest award of the Explorers' Club, and the 2012 David Fairchild Medal for Plant Exploration, the most prestigious prize for botanical exploration.

GOR004409944
Into The Silence: The Great War, Mallory and the Conquest of Everest by Wade Davis
Wade Davis
Used - Very Good
Paperback
Vintage Publishing
2012-10-04
672
0099563835
9780099563839
N/A
Book picture is for illustrative purposes only, actual binding, cover or edition may vary.
This is a used book - there is no escaping the fact it has been read by someone else and it will show signs of wear and previous use. Overall we expect it to be in very good condition, but if you are not entirely satisfied please get in touch with us.