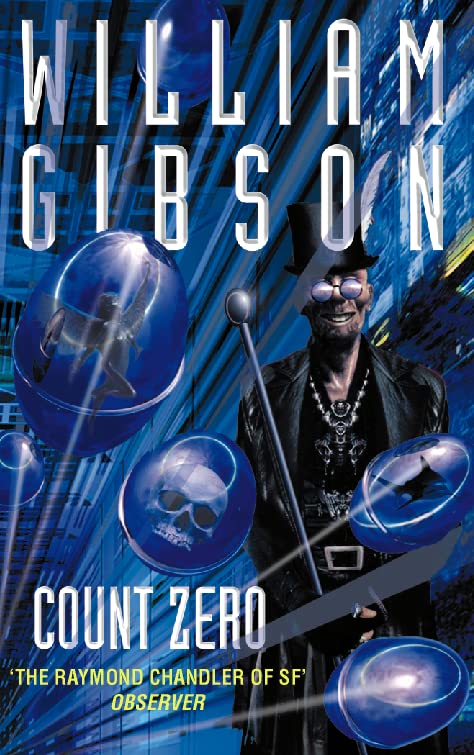 In the Matrix of cyberspace, angels and voodoo zaibatsus fight it out for world domination and computer cowboys like Turner and Count Zero risk their minds for fat crumbs.

In the Matrix of cyberspace, angels and voodoo zaibatsus fight it out for world domination and computer cowboys like Turner and Count Zero risk their minds for fat crumbs.

Turner woke up in a new body with a beautiful woman beside him. They let him recuperate for a while in Mexico, then Hosaka reactivated his memory for a mission more dangerous than the one that nearly killed him.

The head designer from Maas-Biolabs is defecting to Hosaka, or so he says. Turner has to deliver him safely, and the biochips he invented - which are of supreme interest to other parties, some of whom are not human.

Count Zero is human. Indeed, he's just a kid from Barrytown, and totally unprepared for the heavy duty data coming his way when he's caught up in the cyberspace war triggered by the defection. With voodoo on the Net and angels in the software, he can only hope that the megacorps and the superrich have their virtual hands full already.

`A masterly peek into the computer-obsessed electronic global ghetto, narrated in a futuristic sland-enriched vocabulary'
Time Out

`Gibson is the foremost of a group of young American writers who are recording today's hip, streetwise, computer-literate youth in science fiction terms'
Fiction Magazine

`Gibson is the Raymond Chandler of SF'
Observer

`Gibson is up your alley. He is a technological fantasist with unparalleled sensitivity... wired direct to the mains'
New Musical Express

William Gibson was born in 1948. He was raised and educated in `southern Lovecraftian' Virginia, USA, but moved to Canada soon after leaving school. He now lives in Vancouver, British Columbia. He is married and has two children.

GOR001145838
Count Zero by William Gibson
William Gibson
Used - Very Good
Paperback
HarperCollins Publishers
1987-07-09
336
0586071210
9780586071212
N/A
Book picture is for illustrative purposes only, actual binding, cover or edition may vary.
This is a used book - there is no escaping the fact it has been read by someone else and it will show signs of wear and previous use. Overall we expect it to be in very good condition, but if you are not entirely satisfied please get in touch with us.