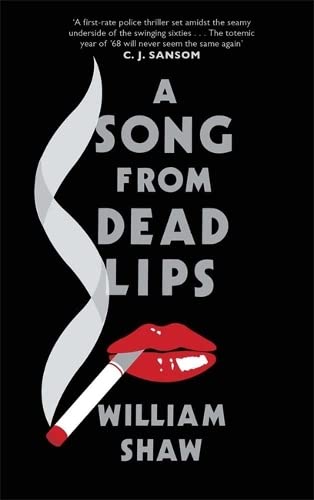 A Song from Dead Lips by William Shaw

The first Breen & Tozer police thriller that reveals gritty sixties London in all its power and prejudice.

A Song from Dead Lips: the first book in the gritty Breen & Tozer series by William Shaw

A nameless young woman is found naked and strangled in an alley on Abbey Road.

DS Cathal Breen, an outcast in the Marylebone CID, struggles to make sense of the case.

Until new recruit WPC Helen Tozer - the first woman to join the team - makes a breakthrough.

And as hippies slam doors in their face, and locals suspect the new African neighbours, Breen and Tozer tread down a perilous path, closing in on a cruel conspiracy that goes far beyond class, colour and creed.

'A first-rate police thriller set amidst the seamy underside of the swinging sixties ... The totemic year of '68 will never seem the same again' * C. J. Samson *
'Convincing atmosphere, lively dialogue and a fun cop duo unite Beatlemania, English racism and the Biafran war' * The Times *
Excellent ... authentic, often humorous ... The Sixties have been examined and presented every which way, but A Song From Dead Lips manages to be something fresh, both in this regard and as a detective novel * Killing Time Crime *
'Excellent procedural ... A gripping story, with two appealing protagonists and impeccably researched period details deployed throughout' * Guardian *
'London in 1968 is an evocative setting and Shaw skilfully re-creates an era of social turmoil and class conflict' * Sunday Times *
'Superb characterisation, a vivid recreation of the era, its sights, sounds and prejudices make this a highly enjoyable and readable debut for the pairing, although with Tozer threatening to return to the West Country, a series seems a shade ambitious. I trust that Shaw, who is certainly a name to note for the future, has a plan to subvert this and we shall see this original and likeable couple again soon' * Crime Review *
William Shaw has been shortlisted for the CWA Historical Dagger, longlisted for the Theakstons Crime Novel of the Year and nominated for a Barry Award. A regular at festivals, he organises panel talks and CWA events across the south east. Shaw is the author of the acclaimed Breen & Tozer crime series: A Song from Dead Lips, A House of Knives, A Book of Scars and Sympathy for the Devil; and the standalone bestseller The Birdwatcher. He is writing a new crime series starring the character DS Alexandra Cupidi from The Birdwatcher, the first of which is Salt Lane. He worked as a journalist for over twenty years and lives in Brighton.
GOR005181025
9781782064169
1782064168
A Song from Dead Lips: the first book in the gritty Breen & Tozer series by William Shaw
William Shaw
Breen and Tozer
Used - Very Good
Hardback
Quercus Publishing
2013-08-01
400
N/A
Book picture is for illustrative purposes only, actual binding, cover or edition may vary.
This is a used book - there is no escaping the fact it has been read by someone else and it will show signs of wear and previous use. Overall we expect it to be in very good condition, but if you are not entirely satisfied please get in touch with us
Trustpilot