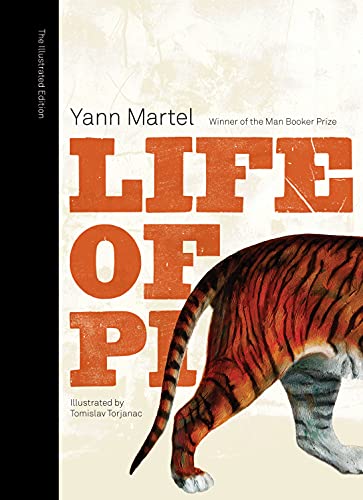 After the tragic sinking of a cargo ship, one solitary lifeboat remains bobbing on the wild, blue Pacific. The only survivors from the wreck are a sixteen-year-old boy named Pi, a hyena, a zebra with a broken leg, a female orang-utan - and a 450-pound Royal Bengal tiger. Since it was first published in 2002, Life of Pi has entered mainstream consciousness and remains one of the most extraordinary works of fiction in recent years. In October 2005 Canongate launched a competition with The Times to find an artist to illustrate Yann Martel's international bestseller. Soon the competition expanded as the Globe and Mail and The Age newspapers also launched a search in Canada and Australia. From thousands of entries, Croatian artist Tomislav Torjanac was chosen as the illustrator for this new edition of Life of Pi. Now readers can enjoy this extraordinary tale with his glorious colour illustrations.

Yann Martel is a vivid and entrancing story-teller. * * Sunday Telegraph * *
An inventive, shocking and ultimately uplifting story. * * Daily Mail * *
In its subject and its style, this enormously lovable novel is suffused with wonder: a willed innocence that produces a fresh, sideways look at our habitual assumptions, about religious divisions, or zoos versus the wild, or the possibility of freedom. As Martel promises in his author's note, this is fiction probing the imaginative realm with scientific exactitude, twisting reality to 'bring out its essence' -- Justine Jordan * * Guardian * *
Yann Martel's third work of fiction, Life of Pi, is a terrific book. It's fresh, original, smart, devious, and crammed with absorbing lore. . . Life of Pi is not just a readable and engaging novel, it's a finely twisted length of yarn. . . Like its noteworthy ancestors, among which I take to be Robinson Crusoe, Gulliver's Travels, the Ancient Mariner, Moby Dick and Pincher Martin, it's a tale of disaster at sea coupled with miraculous survival - a boys' adventure for grownups. -- Margaret Atwood * * Sunday Times * *
Here is a writer with a talent as fabulous as the tale that he - and his Pi - have to tell. * * Spectator * *

Yann Martel is the author of a short story collection, The Facts Behind the Helsinki Roccamatios, and of four novels, Self, Beatrice & Virgil, Life of Pi (for which he was awarded the 2002 Man Booker Prize), and his latest, The High Mountains of Portugal. Life of Pi was adapted for the silver screen by Ang Lee, garnering four Oscars. Martel also ran a guerilla book club with Stephen Harper, sending the former prime minister of Canada a book every two weeks for four years. The letters that accompanied the books were published as 101 Letters to a Prime Minister. Martel lives in Saskatoon, Saskatchewan, with the writer Alice Kuipers, and their four children.