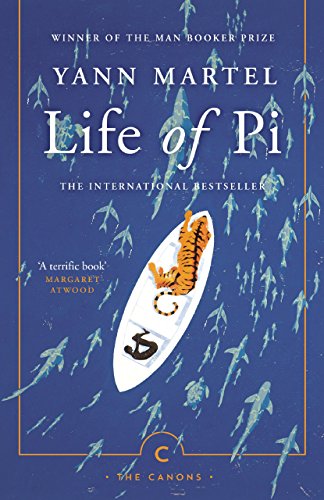 Life Of Pi
by Yann Martel

Life Of Pi by Yann Martel

One boy, one boat, one tiger . . . After the tragic sinking of a cargo ship, a solitary lifeboat remains bobbing on the wild, blue Pacific. The only survivors from the wreck are a sixteen-year-old boy named Pi, a hyena, a zebra (with a broken leg), a female orang-utan - and a 450-pound Royal Bengal tiger. The scene is set for one of the most extraordinary and best-loved works of fiction in recent years.

This enormously lovable novel is suffused with wonder * * Guardian * *
A terrific book . . . Fresh, original, smart, devious, and crammed with absorbing lore -- MARGARET ATWOOD
Every page offers something of tension, humanity, surprise, or even ecstasy * * The Times * *
Vivid and entrancing * * Sunday Telegraph * *
Extraordinary . . . Life of Pi could renew your faith in the ability of novelists to invest even the most outrageous scenario with plausible life * * New York Times Book Review * *
Full of clever tricks, amusing asides and grand originality * * Daily Telegraph * *
Inventive, shocking and ultimately uplifting * * Daily Mail * *
Dramatises and articulates the possibilities of storytelling * * Observer * *
A unique and original story, brilliantly told * * Guardian * *
Martel's engaging characterisation and vivid description enliven and enrich this dreamy, fantastic tale * * The Times * *

Yann Martel was born in Spain in 1963 of Canadian parents. After studying philosophy at university, he travelled and worked at odd jobs before turning to writing. In addition to the Man Booker Prize-winning Life of Pi, which has been translated into over fifty languages and has sold over thirteen million copies worldwide, he is the author of the novels Self, Beatrice and Virgil and The High Mountains of Portugal, the stories The Facts Behind the Helsinki Roccamatios, and the collection of letters to the Prime Minister of Canada, What is Stephen Harper Reading? He lives in Saskatchewan, Canada.

NGR9781786891686
Life Of Pi by Yann Martel
Yann Martel
Canons
New
Paperback
Canongate Books Ltd
2018-07-05
336
1786891689
9781786891686
Winner of The Man Booker Prize 2002 (UK) Winner of Boeke Prize 2003 (South Africa) Winner of Asian/Pacific American Award for Literature in Best Adult Fiction 2001-2003 (United States) Short-listed for Coventry Inspiration Book Awards 2013 (UK)
Book picture is for illustrative purposes only, actual binding, cover or edition may vary.
This is a new book - be the first to read this copy. With untouched pages and a perfect binding, your brand new copy is ready to be opened for the first time.