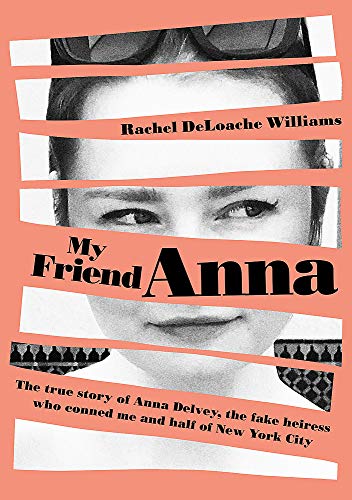 How does it feel to be betrayed by your closest friend? A close friend who turns out to be the most prolific grifter in New York City...

'Explosive ... Definitely one for the beach' ELLE

'Paints a fascinating picture of an eccentric egomaniac who rails against all authority ... gripping stuff' SUNDAY TIMES
___________

How does it feel to be betrayed by your closest friend? A close friend who turns out to be the most prolific grifter in New York City...

This is the true story of Anna Delvey, the fake heiress whose dizzying deceit and elaborate con-artistry deceived the Soho hipster scene before her ruse was finally and dramatically exposed.

But after Anna's debit card was declined in a Moroccan medina whilst on holiday in a five-star luxury resort, Rachel began to suspect that her increasingly mysterious friend was not all she seemed.

This is the incredible story of how Anna Sorokin conned the high-rollers of the NYC social scene and convinced her close friend of an entirely concocted fantasy, the product of falsified bank documents, bad cheques and carefully edited online photos.

Written by Rachel DeLoache Williams, the Vanity Fair photography editor who believed Anna's lies before helping the police to track her down (fittingly, deciphering Anna's location using Instagram), this is Catch Me If You Can with Instagram filters. Between Anna, Fyre Festival's Billy McFarland (Anna even tried to scam Billy) and Elizabeth Holmes, whose start-up app duped the high and mighty of Silicon Valley, this is the year of the scammer.

*Anna stood a high-profile trial in New York that has been followed voraciously by the media. She was found guilty of theft of services and grand larceny, facing up to 15 years in prison. The trial ended on 25th April.*

My Friend Anna is the dishy story you've been craving ever since Anna Delvey first made headlines... a harrowing account of what it's like to be conned. - Refinery29Gripping. - Sunday MirrorIt is everything I wanted it to be and more. A deep dive around New York's coolest bars and hippest hangouts and a tale of two girls that blurs the lines between friend and freelancer. - RedMy Friend Anna is sensational. - BustleBeach reads should be light, fun, and serve a lot dish. That's why number one on my summer reading list is My Friend Anna: The True Story of a Fake Heiress by Rachel DeLoache Williams. - Town & CountryAddictive - iTotally gripping ... impossible to put down for the duration, My Friend Anna is undeniably one of the summer's most compelling reads. - Sunday Business PostAn intimate, methodical look at the pair's relationship. - The Skinny
Rachel DeLoache Williams was born and raised in Knoxville, Tennessee, and is a graduate of Kenyon College. In 2010, she moved to New York City and landed her dream job in the photo department of Vanity Fair, where she helped produce photo shoots, including those for the annual Hollywood and New Establishment issues, and worked with the magazine's leading photographers and iconic subjects. My Friend Anna is her first book.
GOR010285860
9781787478299
1787478297
My Friend Anna: The true story of the fake heiress of New York City Rachel DeLoache Williams
Rachel DeLoache Williams
Gebraucht - Sehr Gut
Broschiert
Quercus Publishing
2019-07-23
288
N/A
Die Abbildung des Buches dient nur Illustrationszwecken, die tatsächliche Bindung, das Cover und die Auflage können sich davon unterscheiden.
Dies ist ein gebrauchtes Buch. Es wurde schon einmal gelesen und weist von der früheren Nutzung Gebrauchsspuren auf. Wir gehen davon aus, dass es im Großen und Ganzen in einem sehr guten Zustand ist. Sollten Sie jedoch nicht vollständig zufrieden sein, setzen Sie sich bitte mit uns in Verbindung.