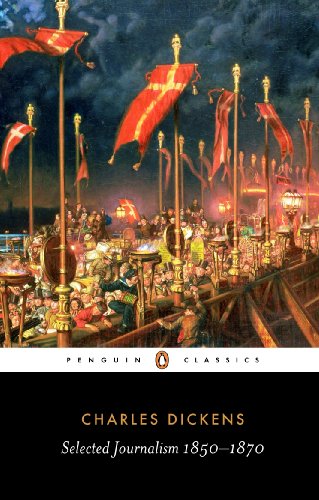 Aims to catch the imagination of a public besieged by hack journalism. This title includes writings that are a blend of public and private, news and recollection, reality and description. It traces the development of the author's career as a journalist and examines his fusion of real events with flights of fancy.

A testament to the energy and creativity of a writer and journalist without equal, Charles Dickens's Selected Journalism 1850-1870 is edited with an introduction and notes by David Pascoe in Penguin Classics.

Throughout his writing career Charles Dickens was a hugely prolific journalist. This volume of his later work is selected from pieces that he wrote after he founded the journal Household Words in 1850, up until his death in 1870. Here subjects as varied as his nocturnal walks around London slums, prisons, theatres and Inns of Court, journeys to the continent and his childhood in Kent and London are captured in remarkable pieces such as 'Night Walks', 'On Strike', 'New Year's Day' and 'Lying Awake'. Aiming to catch the imagination of a public besieged by hack journalism, these writings are an extraordinary blend of public and private, news and recollection, reality and fantastic description.

David Pascoe's introduction traces the development of Dickens's career as a journalist and examines his fusion of real events with flights of fancy. This edition also includes explanatory notes, a bibliography and a Dickens chronology.

If you enjoyed Selected Journalism 1850 - 1870, you might like Dickens's Sketches by Boz, also available in Penguin Classics.