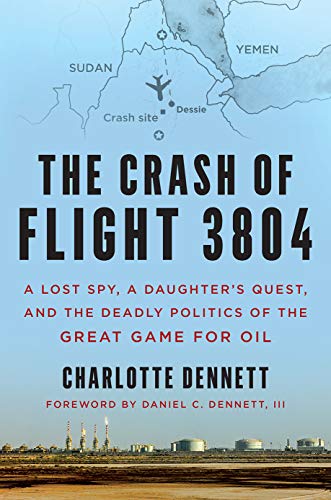 The Crash of Flight 3804 Charlotte Dennett

In 1947, Daniel Dennett, America's sole Master Spy in the Middle East, was dispatched to Saudi Arabia to study the route of the proposed Trans-Arabian Pipeline. It would be his last assignment. A plane carrying him to Ethiopia went down, killing everyone on board

The Crash of Flight 3804: A Lost Spy, a Daughter's Quest, and the Deadly Politics of the Great Game for Oil Charlotte Dennett

While unravelling the mystery of her father - a Master Spy's - death, an investigative journalist reveals the truth behind an era of endless wars in the Middle East by following the pipelines.

In 1947, Daniel Dennett, America's sole Master Spy in the Middle East, was dispatched to Saudi Arabia to study the route of the proposed Trans-Arabian Pipeline. It would be his last assignment. A plane carrying him to Ethiopia went down, killing everyone on board.

In The Crash of Flight 3804 investigative journalist Charlotte Dennett digs into her father's postwar counterintelligence work, which pitted him against America's wartime allies - the British, French, and Russians - in a covert battle for geopolitical and economic influence in the Middle East. Through stories and maps, she reveals how feverish competition among superpower intelligence networks, military, and Big Oil interests have fuelled indiscriminate attacks and targeted killings that continue to this day.

Part personal pilgrimage, part deft critique, Dennett's insightful reportage examines what happens to international relations when oil wealth hangs in the balance and shines a glaring light on what so many have actually been dying for.

The Crash of Flight 3804 provides important context for understanding the Middle East region, while bringing new questions to light, including:

The Crash of Flight 3804 is a triumph on two fronts. First, it's a comprehensive history of U.S. involvement in the Middle East that manages the uncommon feat of placing this history into its proper context: America's need for Middle Eastern oil. It also serves as an exciting, moving account of author Charlotte Dennett's decades-long journey to expose the truth behind her father's death.-Resilience.org

What makes the book so compelling is how much deeper and broader she digs than personal memoir. . . . Equal parts Thomas L. Friedman and Tom Clancy, the book is a remarkable achievement whose personalized insights on geopolitics are both gripping and sobering.-Seven Days

Dennett displays chill forbearance, detective skills and a stubborn tenacity that prompted one CIA staffer to suggest she should work for the agency. Her fine, challenging mind not only wins a more complex view of the region's exploitation. She also delivers her widened respect for her father's work and values-despite her own contemporary perspective that sees what he could not have predicted. . . . Both [Rachel Maddow's Blowout and The Crash of Flight 3804] are highly readable, disturbing and also stirring.-Ms. Magazine

What [Dennett] makes clearer than ever is the extent to which pipelines have in fact been a major factor in more wars than most people recognize.-World Beyond War.org

It's a tremendous book . . . [that] shatters the notion that wars are driven by the need to go after tyrants or spread democracy.-David Swanson, Talk Radio Nation

The most extraordinary historical account of pipeline politics and the blood-drenched Great Game for Oil ever written. Investigative reporter Charlotte Dennett's tenacious, decades-long quest to uncover the truth about the death of her father-America's first master spy in the Middle East-has resulted in a riveting saga replete with previously hidden details about the powerful characters, countries, and corporations locked in vicious perpetual competition to control the world's oil. No book connects the dots like this one, and with such fascinating clarity. Urgent reading for anyone looking to understand who and what brought us into the War on Terror era and how the groundwork for future wars is being laid.-Kristina Borjesson, author of Feet to the Fire; creator and cohost of The Whistleblower Newsroom

A must-read to understand America's addiction to endless wars in the Middle East. Charlotte Dennett masterfully unravels the Great Game for Oil from the dawn of the Cold War, through Beirut and Baghdad's bloody street battles, to today's tragic headlines. Her unnerving journey begins with the mysterious death of her father (a renowned master spy in the Middle East) in the Ethiopian highlands in 1947 at the onset of the Cold War. Sleuthing through seven decades of the sinister American-Saudi nexus-framed by FDR and Ibn Saud-Dennett skillfully shines light on the feudal kingdom that continues to interlock itself with US interests to this day. Following a widening nexus of Big Oil, ARAMCO, and Middle East pipelines to the Eastern Mediterranean, Israel, US Congress, and the Saudi rulers in Riyadh, Dennett has crafted a page turner that reads like a thriller. Ironically, her father's warning echoes throughout the book: 'God help us if we ever send troops to the Middle East.' Decades on, his daughter has picked up the torch to illuminate how America's addiction to endless wars is actually the ongoing covert battle for energy still being played out in Afghanistan, Georgia, Russia, Iran, Iraq, Syria, Gaza, Yemen, and other explosive regions of the world. And the tragedy continues. Bravissima for Dennett's courageous, compelling, and unnerving work!-Terence Ward, author of The Wahhabi Code

As a retired US Army colonel and diplomat in Nicaragua, Grenada, Somalia, Uzbekistan, Kyrgyzstan, Sierra Leone, Micronesia, Afghanistan, and Mongolia, I found this book to be fascinating-filled with a treasure trove of details about the beginning of the oil wars in the Middle East and continuing to today with the United States 'guarding' Syria's oil fields as it attempts to overthrow Syria's Assad government. Dennett reminds us of the first-ever coup d'etat by the CIA. Due to Syrian opposition to the route of the first pipeline out of Saudi Arabia, the CIA overthrew Syrian president Shukri al-Quwatli in 1949 and replaced him with the Army chief of staff who approved the Syrian route. Dennett's father, the sole US master spy in the Middle East in the late 1940s, was involved in pipeline issues and died in a still unexplained crash of a US government plane. The book goes well beyond the 1940s and tracks the deals, missteps, and wars for oil. The detailed maps show pipeline routes over the decades and are themselves a remarkable way to track the political dynamics of the region!-Ann Wright, retired colonel, US Army/Army Reserves; former US diplomat

Charlotte Dennett has a fascinating personal saga to share and a mystery to solve. This book offers the hidden backstory to the history of US involvement in the Middle East. It is the type of broad and deep historical dig that is so badly needed, and it helps us see the bigger picture behind policies and failures that affect us today. Suddenly, all these wars make sense.-Russ Baker, author of Family of Secrets; founder and editor-in-chief, WhoWhatWhy

Investigative journalist Charlotte Dennett is onto something big. As an outsider researching her master spy father's 1947 death at the dawning of the Great Game for Oil, she takes on the CIA's notorious secrecy with fierce determination. That leads Dennett to the highest echelons of the agency while looking for answers and, intriguingly, the CIA makes it clear they want her on their side. Dennett's telling is a 'ghost story' beginning at the foundation of the CIA that still haunts us today as the world her father died for disintegrates into chaos. One cannot help but wonder that if her father had lived, could his nuanced vision for the Middle East have altered the disastrous course the United States is on now?-Paul Fitzgerald and Elizabeth Gould, authors of Invisible History

A mix of curiosity and loyalty-to family and country-drove Charlotte Dennett to find out if the 'humaneness' ascribed to her spymaster father by his Harvard professor could have persisted in the dog-eat-dog espionage surrounding post-WWII access to Middle East oil. She found abundant material to answer that question and many others about the early death of her father and about the origins of the endless wars that have come to characterize the region he loved. We are gifted with an intriguing, personal account of the Great Game for Oil and its countless and continuing casualties.-Ray McGovern, cofounder, Veteran Intelligence Professionals for Sanity; former CIA analyst

A father's death and perhaps murder by 'allies' while pursuing a vital mission for the United States. A daughter's lifelong search for truth and justice. Spies. Fortune-seekers. A cast of royals, brigands, bankers, patriots, and other history-makers struggling to control oil wealth from Central Asia to the Middle East to Northern Africa over the past century. Compelling country-by-country current analysis by an expert reporter and historian. Revelations about the 'pipeline politics' that constantly create headlines about endless war, war crimes, terrorism, and ethnic cleansing, but remain little understood by Westerners, including major media. All of that is combined in this page-turning memoir, culminating in a surprise ending. In brief, this is a masterpiece.-Andrew Kreig, editor, Justice Integrity Project; author of Presidential Puppetry