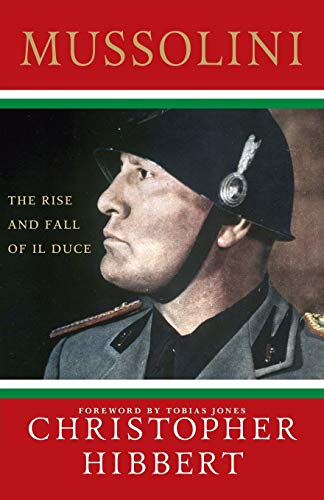 With his signature insight and compelling style, Christopher Hibbert explains the extraordinary complexities and contradictions that characterized Benito Mussolini. Hibbert traces his unstoppable rise to power, examines his legacy and reveals why he continues to be both revered and reviled by the Italian people.

Mussolini: The Rise and Fall of Il Duce Christopher Hibbert

With his signature insight and compelling style, Christopher Hibbert explains the extraordinary complexities and contradictions that characterized Benito Mussolini. Mussolini was born on a Sunday afternoon in 1883 in a village in central Italy. On a Saturday afternoon in 1945 he was shot by Communist partisans on the shores of Lake Como. In the sixty-two years in between those two fateful afternoons Mussolini lived one of the most dramatic lives in modern history. Hibbert traces Mussolini's unstoppable rise to power and details the nuances of his facist ideology. This book examines Mussolini's legacy and reveals why he continues to be both revered and reviled by the Italian people.

"Christopher Hibbert is a wonderful narrative historian who has illuminated many corners of Italian life and history. He has the gift of creating scenes and characters, of rendering the vividness of the past. His Mussolini is no exception. He manages to convey both the charisma and dilettantismo of Mussolini the revolutionary leader as well as the later folly of Il Duce, the dictator who began increasingly to believe his own rhetoric -- ''Mussolini is always right' -- in leading his country into World War and ruin." --Alexander Stille, award-winning author of Benevolence and Betrayal: Five Italian-Jewish Families Under Fascism, and of The Sack of Rome: Media + Money + Celebrity = Power = Silvio Berlusconi

"Hibbert is a remarkably prolific popular historian, who can take on almost anything, from Dickens to General Wolfe, from Agincourt to Garibaldi." --The Observer

"An excellent account...balanced and perceptive in outlook...well-written and entertaining." --Economist

"[Hibbert] is a superbly skillful historical writer." --The Spectator

"An adroitly written evocation of a compelling but enigmatic personality, a man whose ambition, idealism and opportunism would not seem out of place on the political scene today." --Publishers Weekly on Disraeli