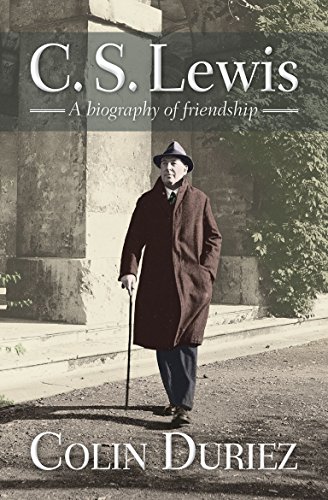 An accessible biography of C S Lewis, his life and the friendships that shaped him.

An Oxford student of C.S. Lewis's said he found his new tutor interesting, and was told by J.R.R. Tolkien, 'Interesting? Yes, he's certainly that. You'll never get to the bottom of him.' You can learn a great deal about people by their friends and nowhere is this more true than in the case of C.S. Lewis, the remarkable academic, author, populariser of faith - and creator of Narnia. He lost his mother early in life, and became estranged from his father, much to his regret. Throughout his life, key relationships mattered deeply to him, from his early days in the north of Ireland and his schooldays in England, as still a teenager in the trenches of World War One, and then later in Oxford. The friendships he cultivated throughout his life proved to be vital, influencing his thoughts, his beliefs and his writings. What did Arthur Greeves, a life-long friend from his adolescence, bring to him? How did J.R.R. Tolkien, and the other members of the now famous Inklings, shape him? Why, in his early twenties, did he move in with a single mother twice his age, Janie Moore, and live with her for so many years until her death? And why did he choose to marry so late? What of the relationship with his alcoholic and gifted brother, who eventually joined his unusual household? In this sparkling new biography, which draws on material not previously published, Colin Duriez brings C.S. Lewis and his friendships to life.
One thing the author did was whet my appetite for more - I will be exploring the writings of Lewis and many of his friends. -- Janet Kinsella * www.amazon.com *
Duriez, certainly goes into great detail about Lewis's search for meaning and longing for joy, his conversation, and his academic career and writing. I would recommend this to any C.S.Lewis fan. -- Lisa Sanderson * Netgalley *
I love C S Lewis and think that this book is the perfect addition to any Christian's collection. -- Amanda Holmes * Netgalley *
Honest and true, this is a well written book that reads like a great conversation. The extent with which the author shares the true story of Lewis's life is amazing. It wasn't written from the point of adoration that makes the reader question the honesty. Instead it is written with fresh insight into a wonderful friendship. As a fan of C S Lewis I was hoping for an enjoyable read - but Mr Duriez delivered much more than expected. Enjoy! -- Lynda Smock * Netgalley *
Formative years are explored in Duriez's book, C S Lewis: A Biography of Friendship. -- Clive Price * Families First *
Colin Duriez is an expert on C.S. Lewis, his writings and also his wider circle. He is also the author of the popular biography C.S. Lewis: A biography of friendship and J.R.R. Tolkien: The Making of a Legend (both published by Lion Hudson). He has also written widely on other aspects of Lewis, Tolkien and the other members of the Inklings, and has contributed to conferences, lectures, DVDs and documentaries on these subjects.
GOR006056811
9780745955872
0745955878
C S Lewis: A biography of friendship Colin Duriez
Colin Duriez
Gebraucht - Sehr Gut
Broschiert
Lion Hudson Plc
2013-04-01
256
N/A
Die Abbildung des Buches dient nur Illustrationszwecken, die tatsächliche Bindung, das Cover und die Auflage können sich davon unterscheiden.
Dies ist ein gebrauchtes Buch. Es wurde schon einmal gelesen und weist von der früheren Nutzung Gebrauchsspuren auf. Wir gehen davon aus, dass es im Großen und Ganzen in einem sehr guten Zustand ist. Sollten Sie jedoch nicht vollständig zufrieden sein, setzen Sie sich bitte mit uns in Verbindung.