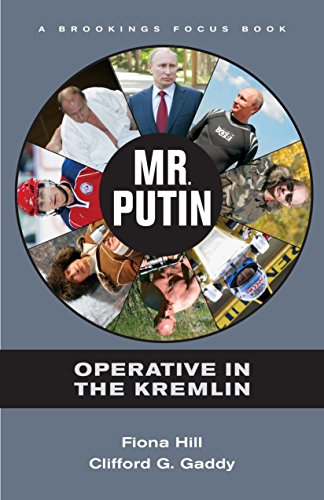 Who is Vladimir Putin? Drawing on a range of sources, including their own personal encounters, the authors describe six that are most essential: the Statist, the History Man, the Survivalist, the Outsider, the Free Marketeer, and the Case Officer. They argues that Putin is in fact a man of many and complex identities.

Who is Vladimir Putin? Observers have described him as a man from nowhere -someone without a face, substance, or soul. Russia experts Fiona Hill and Clifford Gaddy argue that Putin is in fact a man of many and complex identities. Drawing on a range of sources, including their own personal encounters, they describe six that are most essential: the Statist, the History Man, the Survivalist, the Outsider, the Free Marketeer, and the Case Officer.

Understanding Putin's multiple dimensions is crucial for policymakers trying to decide how best to deal with Russia. Hill and Gaddy trace the identities back to formative experiences in Putin's past, including his early life in Soviet Leningrad, his KGB training and responsibilities, his years as deputy mayor in the crime and corruption ridden city of St. Petersburg, his first role in Moscow as the operative brought in from the outside by liberal reformers in the Kremlin to help control Russia's oligarchs, and his time at the helm of a resurgent Russian state.

The authors then examine the nature of the political system Putin has built, explaining it as a logical result of these six identities. Vladimir Putin has his own idealized view of himself as CEO of Russia, Inc. But rather than leading a transparent public corporation, he runs a closed boardroom, not answerable to its stakeholders. Now that his corporation seems to be in crisis, with political protests marking Mr. Putin's return to the presidency in 2012, will the CEO be held accountable for its failings? For more than a dozen years -the equivalent of three American presidential terms - Vladimir Putin has presided over the largest nation on the planet, the second most powerful nuclear arsenal, and massive natural resources. Yet there is still debate about who he really is.

Fiona Hill and Clifford Gaddy have gone a long way in answering that question, starting with the title, which makes a crucial point: even though 'Mr. Putin' was, in his upbringing and early career, a prototype of the Soviet man, he's no longer 'Comrade Putin.' His aim is not the restoration of communism. He has made a deal with the capitalists who have thrived in Russia over the past two decades: they support him in the exercise of his political power, and he supports them in amassing their fortunes. -from the foreword by Strobe Talbott

As experienced students of modern Russia, Fiona Hill and Clifford Gaddy are exceptionally well qualified to explain the experiences and influences which shaped the mind of Vladimir Putin, the President who came from nowhere to assert control of a vast and complex country. Theirs is a tough analysis. Not everyone will agree with every aspect. But, if you want to begin to understand Russia today, read this book. Sir John Scarlett, former Chief of the British SecretIntelligence Service (MI6)

For anyone wishing to understand Russia's evolution since the breakup of the Soviet Union and its trajectory since then, the book you hold in your hand is an essential guide. Essential because to a very large degree the country's most recent history is a reflection of the influence of one man, Vladimir Putin. By skillfully dissecting his various 'identities,' showing how these have been reflected in Russian policies and how they may beinadequate to emerging challenges, Hill and Gaddy illuminate not only the recent past but offer a tantalizing glimpse of what the future may hold. John McLaughlin, former Deputy Director ofU.S. Central Intelligence

A meticulous psychological portrait of Vladimir Putin and of the highly personalized state he has molded. How Vladimir Putin sees himself is key to how his system works, but, after twelve years of Putin Power, the nation and the people he leads have changed while Putin himself has not. Can Putin reinvent himself? Hill and Gaddy say Russia's new urban middle class wants more than a 'political performance artist. Jill Dougherty, former Moscow Bureau Chief, CNN

In this well-written and genuinely entertaining volume, Hill and Gaddy take us behind the theatrics and the rumors to give us a clear and intriguing view of the man himself. They have looked into Putin's eyes and seen... a multiplicity of identities, all of which made him what he is today, and all of which tell us something about the Russia he continues to rule. This book is mandatory reading for the president and his advisers. Robert Kagan, author of The World America Made

Brookings Institution senior fellows and veteran Russia watchers Hill and Gaddy ( The Siberian Curse) bring high-level expertise to bear on the enigma of Vladimir Putin in this illuminating study. The authors divide Putin's political identity into six basic personas, including the Statist, the History Man, the Survivalist, the Outsider, the Free Marketer and, perhaps most crucially, the Case Officer. Their analysis of each combines enough historical background and contemporary analysis for a graduate-level seminar along with an accessible writing style that won't deter more casual readers. The History Man, for example, is shown as habitually invoking Russia's hallowed past to justify his obsession with an ever-looming threat of disorder, while the Case Officer uses persuasive, focused techniques of gaining a target's confidence, first learned in the KGB, to enlist every Russian in the service of the state. Though Hill and Gaddy's prose often bears a think tank report's heavy imprint, the authors' final verdict on the Putin era is astute, warning that unless Putin can adapt and perhaps loosen his grip, this seemingly indispensable man will get the blame when his personalized governance apparatus no longer functions well enough to support his nation's needs. Publishers Weekly,

What makes Hill and Gaddy uniquely qualified for examining this complicated case is their membership in the Valdai Club, which has provided multiple opportunities for meeting the seclusive master of Russian politics, but has not made them members of his fan club...The fast-diminishing efficiency of managing government affairs brings up the question about when and how Putin's rule over Russian state is going to end. The answer is often sought in the economic volatility and derives from the expected decline or even collapse of oil prices in the world market. There is, however, a different way to approach this question, and the thoughtful book published by Hill and Gaddy with excellent timing provides a useful guide for such an exercise. International Spectator