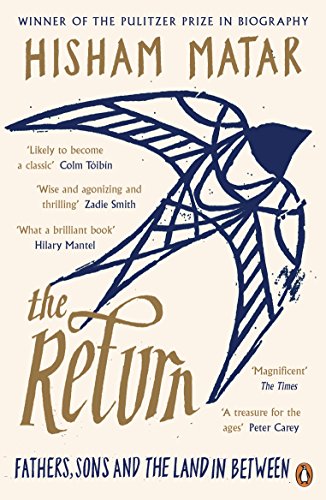 The Return: Fathers, Sons and the Land In Between Hisham Matar

The Return is at once a universal and an intensely personal tale. It is an exquisite meditation on how history and politics can bear down on an individual life. And yet Hisham Matar's memoir isn't just about the burden of the past, but the consolation of love, literature and art. It is the story of what it is to be human.

Hisham Matar was nineteen when his father was kidnapped and taken to prison in Libya. He would never see him again. Twenty-two years later, the fall of Gaddafi meant he was finally able to return to his homeland. In this moving memoir, the author takes us on an illuminating journey, both physical and psychological; a journey to find his father and rediscover his country.

What a brilliant book. The Return reads as easily as a thriller, but is a story that will stick; a person is lost but gravity and resonance remain -- Hilary Mantel
It is likely to become a classic. -- Colm Toibin

A total work of art. It reminded me of Solzhenitsyn. It is of the same importance. I love it.

-- James Rebanks
Wise and agonizing and thrilling to read -- Zadie Smith
Bristles with arresting wisdom -- Jeremy Paxman
A treasure for the ages -- Peter Carey
Tremendously powerful -- Nadeem Aslam
A magnificent memoir of exile and loss -- Rawi Hage
One of the essential books of our times -- Adam Foulds
A profound and powerful meditation on love, loss and exile * Sunday Express *
A truly remarkable book * Daily Telegraph *
Stands comparison with the best literature of exile * Prospect *
[An] extraordinary memoir -- Financial Times
Marvellously well-handled memoir * Evening Standard *
A tale of mighty love, loyalty and courage * Spectator *
A masterful memoir, a searing meditation on loss, exile, grief, guilt, belonging and, above all, family. * Book of the Week, Sunday Times *
Beautifully written * Economist *
Exquisite * Observer *
An astonishing political thriller * Mail on Sunday *
[A] profound work of witnessing and grief... leaves a deep emotional imprint * Newsday *
A moving, unflinching memoir of a family torn apart by the savage realities of today's middle east -- Kazuo Ishiguro
I have always admired Matar's tender and compassionate but equally strong and compelling voice -- Elif Shafak
Mr. Matar is not a wonderful writer because his father disappeared or because his homeland is a mess: he is a brilliant narrative architect and prose stylist, his pared-down approach and measured pace a striking complement to the emotional tumult of his material . . . This book is an extraordinary gift for us all * Wall Street Journal *
Breathtaking memoir... an elegy by a son who, through his eloquence, defies the men who wanted to erase his father and gifts him with a kind of immortality * Washington Post 10 Best Books of 2016 *
The Return moved me to tears and taught me about love and home -- Chimamanda Ngozi Adichie * Guardian Books of the Year *
A desolating and powerful account of his son's search for his father, in life and death -- Hilary Mantel * New Statesman Books of the Year *
Is it a sign, or a consequence, of this dreadful year that the best books displayed stern lucidity in the face of darkness and death? Hisham Matar's search for his "disappeared" father in The Return (note how badly British politicians come out of it) -- Julian Barnes * Guardian Books of the Year *
A masterpiece . . . Its concision and reserve only heighten the power of a gripping and agonising story -- Alan Hollinghurst * Guardian Books of the Year *
The Return is the self portrait of a haunting, a kind of political ghost story - made more unbearable by the beauty of its prose * Daily Telegraph Books of the Year *
The intelligence and grace of Matar's writing is fuelled by a fierce and valid rage -- Rupert Thomson * Observer Books of the Year *
For Matar, hope depends on individuals and families standing by cherished values -- Jonathan Benthall * Times Literary Supplement Books of the Year *
A haunting and terrifying story, told with courage, anger, dignity and unswerving determination -- Blake Morrison * Guardian Books of the Year *
Among the best of the year's writing... This book is his masterful ink-stained resistance * The Sunday Times *
A beautifully-written memoir that skillfully balances a graceful guide through Libya's recent history with the author's dogged quest to find his father' -- Barack Obama
Hisham Matar was born in New York City to Libyan parents and spent his childhood first in Tripoli and then in Cairo. He is the author of two novels, In the Country of Men and Anatomy of a Disappearance, and a work of non-fiction, The Return. In the Country of Men was shortlisted for the Man Booker Prize, the Guardian First Book Award and the National Critics Book Circle Award in the US and won six international literary awards. The Return won a Pulitzer Prize, the PEN/Jean Stein Book Award, the Folio Prize and was shortlisted for many other awards including the Baillie Gifford Prize. Hisham Matar lives in London.
GOR008154252
9780241966280
0241966280
The Return: Fathers, Sons and the Land In Between Hisham Matar
Hisham Matar
Gebraucht - Sehr Gut
Broschiert
Penguin Books Ltd
2017-03-02
304
Winner of Rathbones Folio Prize 2017 Short-listed for Baillie Gifford Prize for Non-Fiction 2016 Short-listed for Costa Biography Award 2016
Die Abbildung des Buches dient nur Illustrationszwecken, die tatsächliche Bindung, das Cover und die Auflage können sich davon unterscheiden.
Dies ist ein gebrauchtes Buch. Es wurde schon einmal gelesen und weist von der früheren Nutzung Gebrauchsspuren auf. Wir gehen davon aus, dass es im Großen und Ganzen in einem sehr guten Zustand ist. Sollten Sie jedoch nicht vollständig zufrieden sein, setzen Sie sich bitte mit uns in Verbindung.