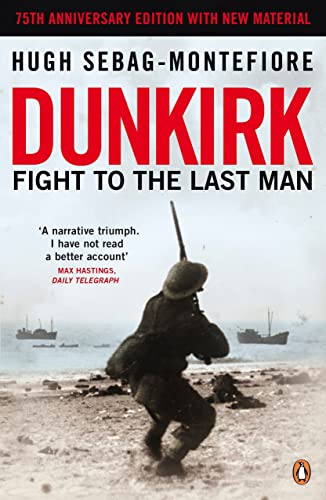 Tells the story of the rescue in May 1940 of British soldiers fleeing capture and defeat by the Nazis at Dunkirk.

Hugh Sebag-Montefiore's Dunkirk: Fight to the Last Man tells the story of the rescue in May 1940 of British soldiers fleeing capture and defeat by the Nazis at Dunkirk.

Dunkirk was not just about what happened at sea and on the beaches. The evacuation would never have succeeded had it not been for the tenacity of the British soldiers who stayed behind to ensure they got away. Men like Sergeant Major Gus Jennings who died smothering a German stick bomb in the church at Esquelbecq in an effort to save his comrades, and Captain Marcus Ervine-Andrews VC who single-handedly held back a German attack on the Dunkirk perimeter thereby allowing the British line to form up behind him.

Told to stand and fight to the last man, these brave few battalions fought in whatever manner they could to buy precious time for the evacuation. Outnumbered and outgunned, they launched spectacular and heroic attacks time and again, despite ferocious fighting and the knowledge that for many only capture or death would end their struggle.

'A searing story . . . both meticulous military history and a deeply moving testimony to the extraordinary personal bravery of individual soldiers' Tim Gardam, The Times

'Sebag-Montefiore tells [the story] with gusto, a remarkable attention to detail and an inexhaustible appetite for tracking down the evidence' Richard Ovary, Telegraph

Hugh Sebag-Montefiore was a barrister before becoming a journalist and then an author. He wrote the best-selling Enigma: The Battle for the Code. One of his ancestors was evacuated from Dunkirk.