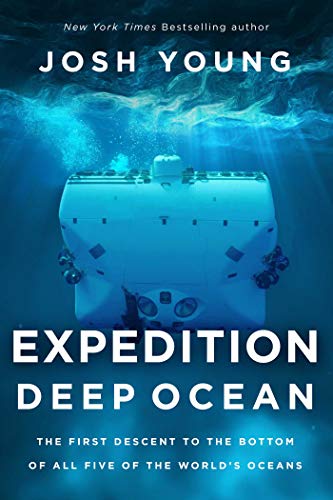 The riveting story of the history-making mission to reach the bottom of all five of the world's oceans - the ultimate frontier of our planet.

Expedition Deep Ocean: The First Descent to the Bottom of All Five Oceans Josh Young

The riveting story of the history-making mission to reach the bottom of all five of the world's oceans - the ultimate frontier of our planet.

Humankind has explored every continent on earth, climbed its tallest mountains, and gone into space. But the largest areas of our planet remain a mystery: the deep oceans. At over 36,000 feet deep, these areas closest to earth's core have remained nearly impossible to reach-until now.

Technological innovations, engineering breakthroughs and the derring-do of a unique team of engineers and scientists, led by explorer Victor Vescovo, brought together an audacious global quest to dive to the deepest points of all five oceans for the first time in history.

Expedition Deep Ocean tells the inside story of this exploration of one of the most unforgiving and mysterious places on our planet, including the site of the Titanic wreck and the little-understood Hadal Zone. The expedition pushed technology to the limits, mapped hidden landscapes, discovered previously unknown life forms and began to piece together how life in the deep oceans affects our planet-but it was far from easy.

Vescovo and his team would design the most advanced deep-diving submersible ever built, able to withstand the deep ocean's pressure on the sub of 8 tons per square inch-the equivalent of having 292 fueled and fully loaded 747s stacked on top of it. The hurricane-laden ocean waters and the byzantine web of global oceanographic politics only heightened the challenges.

Expedition Deep Ocean reveals the marvelous and other-worldly life found in the ocean's five deepest trenches, including several new species that have posed as of yet unanswered questions about survival and migration between oceans. Then there are the newly discovered sea mounts that cause tsunamis when they are broken by shifting tectonic plates and jammed back into the earth's crust, something that can now be studied to predict future disasters.

Filled with high drama, adventure and the thrill of discovery, Expedition Deep Ocean celebrates courage and ingenuity and reveals the majesty and importance of the deep ocean.
"Exciting and suspenseful. Make no bones about it-this is an old-fashioned adventure story. Wonderfully readable, Young weaves in scientific, geographic and engineering details effortlessly. There's humor and drama and headaches galore. Fundamentally, Expedition Deep Ocean is a book about tackling - and solving - really difficult problems. You need talented people with different skills, a level-headed leader and patience for initial failures. It will take a lot of money, and you may never get much credit for your accomplishment. More than just a fun read, these are lessons that we all could use right now. Can we send a copy to Washington?" -- Lucinda Robb * The Washington Post *
"Expedition Deep Ocean takes readers behind the scenes, beneath the waves, and around the globe on one of the most audacious adventures of our time. It's a white-knuckle journey with larger-than-life characters, cutting-edge technology, and a singular purpose: to go deeper. Fittingly, Josh Young tells the inspiring story of Victor Vescovo and his team in great depth." -- Susan Casey, author of The Devil's Teeth, The Wave, and Voices in the Ocean
"What do you do next, if you're a visionary explorer who has summited the highest peak on every continent and skied across both the North and South Poles? For Victor Vescovo, the answer was to become the first person to dive to the deepest point in all five ocean basins. The first two problems he encountered were daunting: Nobody knew quite where they were, and no existing underwater vehicle existed could dive anywhere near that deep. Expedition Deep Ocean takes you inside his quest to overcome these (and many other) hurdles and complete the Five Deeps challenge, transforming deep-ocean exploration in the process. Josh Young's engaging account of the colorful characters and grand adventure of the Five Deeps Expedition will keep you turning the pages." -- Dr. Kathy Sullivan, Scientist, Astronaut, Explorer, first woman to reach the Challenger Deep, first person to reach the deep ocean and be in space
"What you don't realize when you see a headline about the world's first successful attempt to reach the bottom of all 5 oceans is how much work and stress went into it. Citizen explorer Victor Vescovo's remarkable quest to complete earth's last great adventure could easily have gone wrong-and it nearly did, many times. But he stuck with it, and history was made. Vescovo has done something audacious and important here - and thanks to this riveting account of every incredible moment, his story can be told for generations." -- Josh Dean, journalist and author of The Taking of K-129
"In the Pantheon of great explorers-Amundsen, Heyerdahl, Hillary, Armstrong, among others-a new name must be added. That name is Victor Vescovo, an explorer of the highest order. We now have an engrossingly written account of Vescovo's remarkable global quest to conquer those areas closest to the earth's core. Exploration Deep Ocean draws the reader into all the myriad aspects of such an adventure, from designing and building a submersible capable of diving over 36,000 feet, to negotiating global politics, to the actual dives and the mysteries discovered as Vescovo went to spots heretofore deemed impossible to reach. Danger and risk have been no strangers in my life, but reading Victor's story sent chills down my spine. Expedition Deep Ocean now has a permanent spot on my book shelf." -- Charles C. Krulak, General, US Marine Corps (Ret.), 31st Commandant of the Marine Corps
"Captures the spirit, activities and personalities of the team that made Victor Vescovo's historical The Five Deeps Expedition such a great success. The expedition's pioneering technologies and scientific discoveries in the oceans' deepest places were without parallel. Thanks to Victor's commitment of his time and treasure, the global ocean science community now has been enriched, with the pathway laid to unlock the secrets hidden away in the depths." -- Don Walsh, Captain USN (ret), PhD and US Navy Submersible Pilot #1
"Entertaining. Vescovo emerges as a complicated character...and there is plenty adventure to be found. A vigorous tale of human ambition, technical chllanege, and nervy attitude." * Kirkus Reviews *
"Young combines science, technology, personality clashes, and camraderie in this page-turning tale. The harsh and unforgiving deep ocean is not less of a mystery thanks to Vescovo and his team. A cutting-edge yet classic adventure and an introduction to the wonders of deep-ocean life." -- James Pekoll * Bookilst *
Josh Young is author or co-writer of more than twenty books, including five New York Times bestsellers. His books include Here's the Deal: Don't Touch Me with Howie Mandel, Erasing Death with Dr. Sam Parnia, Epic Survival with Matt Graham, You're Only as Good as Your Next One with Mike Medavoy, and Bob Newhart's I Shouldn't Even Be Doing This.
GOR011682920
9781643136769
1643136763
Expedition Deep Ocean: The First Descent to the Bottom of All Five Oceans Josh Young
Josh Young
Gebraucht - Wie Neu
Gebundene Ausgabe
Pegasus Books
2021-02-18
384
N/A
Die Abbildung des Buches dient nur Illustrationszwecken, die tatsächliche Bindung, das Cover und die Auflage können sich davon unterscheiden.
Das Buch wurde gelesen, ist aber in gutem Zustand. Alle Seiten sind intakt, der Einband ist unversehrt. Leichte Gebrauchsspuren am Buchrücken. Das Buch wurde gelesen, sieht jedoch noch wie neu aus. Der Bucheinband weist keine sichtbaren Gebrauchsspuren auf. Gegebenenfalls ist auch ein Schutzumschlag verfügbar. Keine fehlenden oder beschädigten Seiten, keine Risse, eventuell minimale Knicke, keine unterstrichenen oder markierten Textstellen, keine beschrifteten Ränder.