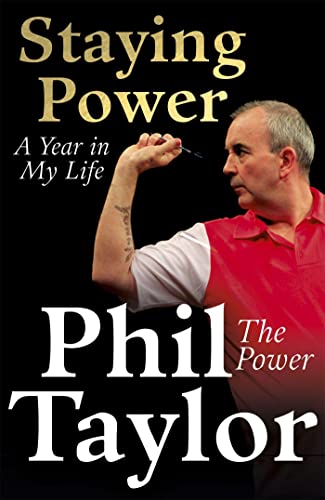 Staying Power: A Year In My Life Phil Taylor

Phil 'The Power' Taylor is the uncontested king of darts, his sixteen world championship titles between 1990 and 2013 far outclassing anything else the game has seen.

He started out as a protege of Eric Bristow, the Crafty Cockney, having wandered into his Burslem pub with a set of darts his wife had given him for his birthday. At that time Taylor was earning GBP52 a week working in a ceramics factory and hardly played. But jaws dropped and pint mugs tipped over as this newcomer suddenly unleashed a gift for flight that had soon eclipsed even the Crafty Cockney himself, and amassed Phil a haul of over 200 professional tournament victories.

Staying Power is a year in the life of a legend, twice nominated for BBC Sports Personality of the Year, a man who made darts look a doddle to British pub-goers everywhere and set his seal on the game as the bloke to beat. A year of triumph and disaster, in which Taylor crashed out of the world championship in the second round to young outsider Michael Smith and fell asleep at home on Christmas day, exhausted from the strain of constant winning. A year when he played arguably the greatest ever game of darts, in the Grand Slam semi-final against recent world champion Adrian Lewis the two slugging it out to the wire. A year in which Taylor rocked Australia, feted like royalty. A year of spats and hecklers, clashes on stage and off, of head-to-heads with the Dutch superstar Michael van Gerwen.

But most of all this is a year in which Phil Taylor, one of sport's greatest champions, has looked hard at his life in his determination to stay in power.

Taylor makes a proud argument for the nobility of his sport, recently reborn as a gladiatorial spectacle packed for 9,000-seater arenas and yet still somehow coming from a reassuringly down-to-earth place. * The Times *

Phil Taylor is widely regarded as the best darts player of all time, having won more than 200 professional tournaments, including 81 major titles and a record 16 World Championships. No darts player has a winning record in matches against him.
He has won the PDC Player of the Year award six times (2006, 2008, 2009, 2010, 2011 and 2012) and has twice been nominated for the BBC Sports Personality of the Year, in 2006 and 2010, finishing as runner-up in the latter. He was the first, and to date, the only person to hit two nine dart finishes in one match, in the 2010 Premier League Darts final against James Wade. He has hit a record ten televised nine-dart finishes and is ranked world number two in the PDC Order of Merit.