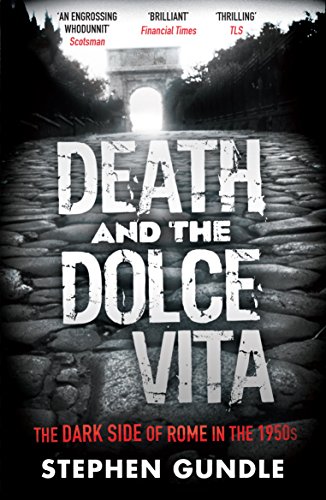 The true story of Italy's most infamous murder, and the scandal that rocked the country.

Death and the Dolce Vita: The Dark Side of Rome in the 1950s Stephen Gundle

On 9 April 1953 an attractive twenty-one-year-old woman went missing from her family home in Rome. Thirty-six hours later her body was found washed up on a neglected beach. Some said it was suicide; others, a tragic accident. But as the police tried to close the case, darker rumours bubbled to the surface. Could it be that the mysterious death of this quiet, conservative girl was linked to a drug-fuelled orgy, involving some of the richest and most powerful men in Italy?
A brilliant, methodical investigation of a murder scandal that convulsed the Roman political and social establishment in the 1950s. * * Financial Times * *
Death and the Dolce Vita, a hybrid of history and police detection, brilliantly recreates the details of the Montesi affair...as well as being a thriller, [it] provides an excellent account of the virtues and misdeeds of Europe's most foxy political class. -- Ian Thompson * * Guardian * *
The term "eroticism of detail" could have been made for this book . . . an intense, claustrophobic narrative of murder, mystery and scandal worthy of a Verdi opera . . . a page-turning narrative that explores its extraordinary characters and even more extraordinary cover-ups, evasions and dissemblage, reaching to the top of Italian political life. * * Scotsman * *
This is microcosmic history at its most effective: Gundle finds big stories in the small print, teasing out the implications for city and nation of this darkly glamorous demi-monde of starlets and playboys, gossip columnists and - paparazzi. -- Boyd Tonkin * * Independent * *
Gundle traces a path through the labyrinth of investigation, cover-up and conspiracy theory that followed to show how the peculiar death of a respectable, unassuming carpenter's daughter came to develop into one of the great scandals - and unsolved mysteries - of the Fifties. * * Daily Telegraph * *
What Gundle captures so magnificently is how the case shed light on the intersection between the stars of public life and the dark underbelly of post-war Rome. -- Ben Felsenburg * * Metro * *
An incredible story and a must-read for crime novel fans. * * Press Association * *
Captivating from the first page ... A tragic case, long-forgotten, has been skilfully resurrected in this brilliant expose of murder and scandal. * * We Love This Book * *
A must-read for crime novel fans. * * Oxford Times * *
A dark, dramatic true-crime story. * * Saga * *
Gundle's intellectual energy and his capacity for research has produced a book that vibrates with the peculiarities of post-war Italy, particularly those of Rome. It is a powerful, convincing recreation of a time and a place. * * Glasgow Sunday Herald * *
Inspired . . . the whole gloriously unimproving narrative provides the essential backstory for the Berlusconian bunga-bunga of Italy in our own day. * * Literary Review * *
There is unlikely to be a more thorough and diligently researched account of the scandal than this one. * * Spectator * *
What [Gundle] has done is brilliantly reconstruct the evolution of a conspiracy theory * * Daily Express * *
Thrilling . . . This is a fascinating story, full of intrigue, gossip, fascinating detail and surprising twists. But it is what Gundle does with the story that makes this such a good book . . . written with verve, this book is hard to put down - but it is also a classic Italian giallo (murder mystery), in which the authorities seem as dodgy as the accused. * * TLS * *
The cover-up described in Gundle's brilliant real-life whodunit is eerily close to Berlusconi's Italy -- Christopher Hirst * * Independent * *
Stephen Gundle is an historian with specialist interest in modern Italy. His books include Bellissima: Feminine Beauty and the Idea of Italy and Glamour: A History. Professor of Film and Television Studies at the University of Warwick, he has also lived for many years in Italy, and is a contributor to History Today, Radio 4's Night Waves and the Italian press.
GOR004133240
9781847676559
1847676553
Death and the Dolce Vita: The Dark Side of Rome in the 1950s Stephen Gundle
Stephen Gundle
Gebraucht - Sehr Gut
Broschiert
Canongate Books Ltd
2012-05-03
416
N/A
Die Abbildung des Buches dient nur Illustrationszwecken, die tatsächliche Bindung, das Cover und die Auflage können sich davon unterscheiden.
Dies ist ein gebrauchtes Buch. Es wurde schon einmal gelesen und weist von der früheren Nutzung Gebrauchsspuren auf. Wir gehen davon aus, dass es im Großen und Ganzen in einem sehr guten Zustand ist. Sollten Sie jedoch nicht vollständig zufrieden sein, setzen Sie sich bitte mit uns in Verbindung.