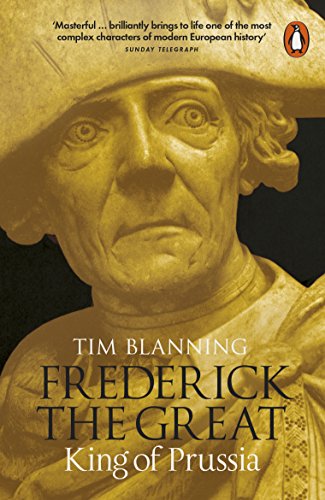 'Masterful ... brilliantly brings to life one of the most complex characters of modern European history' - Sunday Telegraph

'It is sure to be the standard English-language account for many years. It instructs; it entertains; and it surprises' - Philip Mansel, The Spectator

Frederick the Great, King of Prussia, dominated the eighteenth century in the same way that Napoleon dominated the start of the nineteenth. He was a force of nature, a ruthless, brilliant, charismatic military commander, a monarch of exceptional energy and talent, a gifted composer, performer, poet and philosopher, and a discerning patron of artists, architects and writers, most famously Voltaire. From the very start of his reign he was an intensely divisive figure - fascinating even to those who hated him.

Tim Blanning's brilliant new biography captures Frederick's vitality, complexity and flawed genius better than any previous writer. He also recreates a remarkable era, the last flowering of the old regime that would be swept away almost immediately after Frederick's death by the French Revolution.

Equally at home on the battlefield or in the music room at Frederick's extraordinary miniature palace of Sanssouci, Blanning draws on a lifetime's immersion in the eighteenth century to present him in the round, with new attention paid to his cultural self-fashioning, including his sexuality. Frederick's spectre has hung over Germany ever since, both as inspiration and warning - Blanning at last allows us to understand him in his own time.

Highly readable and deeply researched -- Andrew Roberts * Mail on Sunday *
Tim Blanning's masterly biography guides the reader through all these wars and chicaneries with great skill and dry-eyed objectivity -- Noel Malcolm * Telegraph (5*) *
It is sure to be the standard English-language account for many years. It instructs; it entertains; and it surprises -- Philip Mansel * The Spectator *
Tim Blanning is that rarest of scholars, as deft in his command of government and grand strategy as he is in his handling of philosophy and opera, and is rightly regarded as one of Britain's (indeed Europe's) finest historians. This biography finds him at the height of his powers and offers major reassessments of almost every aspect of Frederick's career -- John Adamson * Literary Review *
Potsdam, where the founding father of Prussian autocracy built the prettiest of palaces and picked the loftiest of guardsmen, [is] freshly and fascinatingly described by Tim Blanning -- Nicky Haslam * Spectator *
A similar mastery of topic is evident from the first lines of Tim Blanning's Frederick the Great: King of Prussia (Allen Lane), a virtuoso study of an exceptionally complex man who, through force of personality, helped to shape an equally complex moment in European history. -- Michael Prodger * New Statesman *
A superbly wise and accomplished biographer -- Dominic Sandbrook * Sunday Times *
Tim Blanning's Frederick the Great, is as enthralling on its subject's horribly abusive upbringing as on his bold, sometimes foolhardy military campaigns. Blanning is particularly acute in inquiring, without, prurience, into the notorious question of Frederick's sexuality. -- Ritchie Robertson * TLS *
Tim Blanning is the author of a number of major works on eighteenth century Europe, including The Pursuit of Glory : Europe 1648-1815, The Culture of Power and the Power of Culture and Joseph II. He is Emeritus Professor of Modern European History at the University of Cambridge, a Fellow of Sidney Sussex College, Cambridge and a Fellow of the British Academy. His latest book, Frederick the Great, won the British Academy Medal 2016.
GOR007994239
9780141039190
0141039191
Frederick the Great: King of Prussia Tim Blanning
Tim Blanning
Gebraucht - Sehr Gut
Broschiert
Penguin Books Ltd
2016-10-06
672
N/A
Die Abbildung des Buches dient nur Illustrationszwecken, die tatsächliche Bindung, das Cover und die Auflage können sich davon unterscheiden.
Dies ist ein gebrauchtes Buch. Es wurde schon einmal gelesen und weist von der früheren Nutzung Gebrauchsspuren auf. Wir gehen davon aus, dass es im Großen und Ganzen in einem sehr guten Zustand ist. Sollten Sie jedoch nicht vollständig zufrieden sein, setzen Sie sich bitte mit uns in Verbindung.